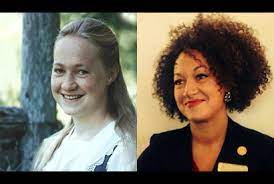 In the early 2010s Rachel Dolezal became Chair of the local Spokane, Washington affiliate for the NAACP.  Only one problem: Dolezal was pure white Euro-ethnic.  She fixed up her hair with curly hair gel, made weekly tanning salon appointments, and instantly became “black.”   Dolezal was eventually busted.  She indulged herself and was caught in some financial irregularities which caused some local journalists to investigate her background, including her ethnicity.  As soon as her ruse had been uncovered, she quickly became an international curiosity and butt of jokes.

Rachel Dolezal, the former Spokane NAACP president who captured the national spotlight when she was outed as a white woman in 2015, has agreed to pay nearly $9,000 in restitution and complete 120 hours of community service to avoid going to trial on charges of welfare fraud.

Dolezal, who changed her name to Nkechi Diallo two years ago, was charged with two felonies in May. 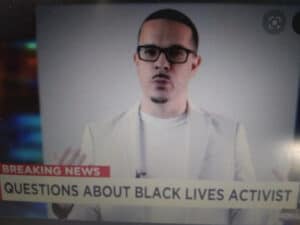 Shuan King had a similar situation.  Born white, King was unhappy with his white upbringing and middle class suburban culture.  He adopted a black guy persona.  He got a Malcom X type hair crop.  He put on some black-rimmed 1950s civil rights style glasses.  King sold himself to the burgeoning anti-cop activist community as a fellow black guy.  He quickly moved up in the ranks.  But critics, including conservative journalists, began to look into his background, and soon discovered, King was actually white.

From Black Enterprise, “Shaun King lives it up in luxe Jersey estate while begging for money…,” 2021:

King has been accused of grifting Black folks in the fight for social justice, stealing money, lying about his racial identity and abusing Black women.

[Twitter Kika Aruajo]’ALL! Ain’t Shaun King supposed to be on hiatus from social media… How is ANYBODY in 2021 still drinking this flavorless Kool-Aid? Bruuuuuh! Ain’t nobody buying the “I’m my Daddy is Black” schpiel either.

Mihaela Plesa is a candidate for the Democrat nomination for Texas House District 70.  She is in a run-off scheduled for May 24.  She came in second in the first round, beating the 3rd place finisher Lorenzo Sanchesz by 29 votes.  Her run-off opponent will be Cassandra Garcia Hernandez.  According to theTexan.news.com: 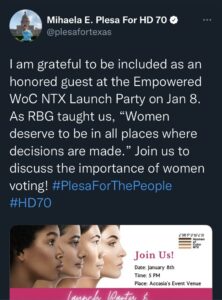 Republicans vying for the seat in the runoff will be Jamee Jolly and Eric Bowlin. Jolly garnered the most votes with over 37 percent while Bowlin came in a close second at just over 32 percent.

District 70 is a perfect swing 50/50 Democrat-Republican split.  The seat was held by a GOPer.

Plesa is purely eastern-central European ethnicity.  Her parents immigrated from Romania in the 1990s.

Plesa is the daughter of immigrants from Eastern Europe. She has been involved in advocacy with such groups as the Young National Organization of Women…

Mihaela Plesa was born and raised right here in North Texas as the only child of immigrant parents who fled Eastern Europe, seeking a better life in the United States.

Plesa is a former community organizer who spent “years of marching, protesting, and advocating…”  Plesa, has a political science degree from SMU and worked a stint in the Texas legislature as a lobbyist.

Her website has a collage of photos of her personal and professional life.  It includes a photo of Plesa as a toddler in traditional European dress, being held up by her European ethnic Dad.  The photo includes ceramics in the background, celebrating European culture and history.

Note – See a photo of Mihaela Plesa dressed up as a Madonna look-alike at the Austin City Limits Music Festival at ATX Street Style. 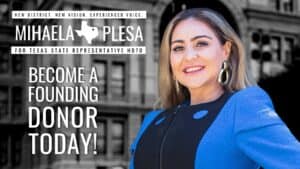 Texas House District 70 based in Collin County just north of Dallas, has become more Hispanic over the years.  It includes McKinney, New Hope and parts of Frisco.  Collin County is 15.5% Hispanic (datausa.tx).

According to a press release from Naleo Education Fund:

White women pretending to be Afro-ethnic or Hispanic is a relatively new phenomenon in American politics.  But it has reared up in the entertainment and fashion worlds.

what Twitter users call “blackfishing” — the phenomena of white female influencers pretending to be black through a combination of makeup and traditionally black hairstyles and fashion.

“On social media, they’re curating a performance of themselves that’s reliant on appropriating parts of black culture,” said Alisha Gaines, an associate professor of English at Florida State University and author of “Black for a Day: Fantasies of Race and Empathy.”

The term “blackfishing” became popular after a Twitter thread by the write Wanna Thompson went viral last year after she called out “all of the white girls cosplaying as black women on Instagram.” 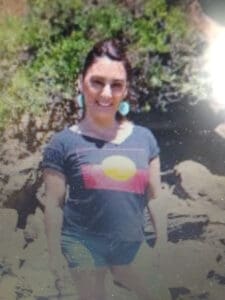 Blackfishing has occurred in politics overseas.  Lidia Thorpe is a Senator in Australia’s parliament.  She is a member of the Green Party.  Despite her Anglo ancestry, European ethnic features, and white skin tone, she claimed to be an Aboriginal when she ran for the seat two years ago.

Via the Sydney Morning Herald:

Ms Thorpe — who was also the first indigenous woman to sit in the Victorian Parliament — will be sworn into Federal Parliament in coming months to fill the vacancy.

The firebrand campaigner for Indigenous issues will take on the role as thousands of people in Australia have defied coronavirus restrictions to rally against Aboriginal deaths in custody in support of the broader Black Lives Matter movement.

“Democrat strategy in Texas is pretending to be Hispanic?”

Scott Greer, a popular Dissident Right/Populist Twitter activist, with over 110,000 followers.  Greet looked into Plesa’s background and discovered she was actually Romanian.  He first broke the Mihaela Plesa story Tweeting out on April 18:

Apparently this Texas Democrat, who is Romanian, claims to be a “woman of color.” Are Eastern Europeans now welcome to the BIPOC cookout?

Damn it’s just everyone except for Western Europeans – Northos

So the Democrat strategy in Texas is pretending to be Hispanic… got it – Mr. Cutlas ’84

UPDATE!  Researchers for Subspecieist have dug up some financial information on candidate Plesa:

She actually seems short on cash. Her top donor Tod Hollenstead is some big-wig game publisher for ID software that makes games like Doom. My anaysis is that she’s short on cash and trying to dupe hispanics and other POC groups that may be funded by our good buddy Soros to toss her a bone.

Hat tip to Gaius Natrollean of Gab for assistance with this article and to RamZ Paul for first bringing this to our attention.