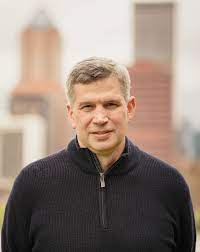 Far-left Portland City Commissioner Jo Ann Hardesty, is in a battle for reelection to her At-large City Commission seat.  Polls have her behind by double digits.  Her opponent is Rene Gonzalez.  He is a small-businessman in the downtown district, and is running on a platform of reducing crime, drug use and homelessness.

Hardesty sent out a Tweet on November 1, accusing Gonzalez of running on a white supremacist platform.

“This election will determine if Portland… we will slide back into Oregon’s white supremacist and classicist history.”

Gonzalez is a self-described “Biden Democrat.”

Hardesty has a long history of tossing the white supremacist label around.   As alt-conservative reporter and Portland resident, Andy Ngo reported in June 2020:

Portland has a number of liberal anti-cop activists who regularly attend city council meetings.  They tape their remarks during the question and answer period of the proceedings.  They typically use the video remarks for their YouTube shows, TikTok and other social media. This riled Hardesty.

Portland Commissioner Jo Ann Hardesty Said White Men Were Hogging the Microphone. They Didn’t Like That. 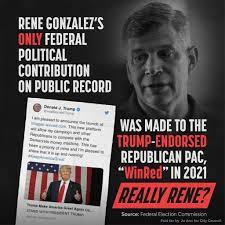 Jo Ann Hardesty, the first black woman to serve on the Portland City Council, launched an unusual and pointed broadside against the disruptive gadflies who interrupted her first council meeting, and many before.

“I am concerned about how privilege, and, specifically, white male privilege, is limiting the public’s access to City Hall,” she said in a statement Jan. 15. “These disruptions create a chilling effect on people who are unaccustomed to coming to our City Hall to have their voices heard.”

The video creators then attacked her on-line.  She responded.

“Sadly, there have been some negative—and racist—comments, reaffirming parts of our white supremacist history, which hurts my heart,” Hardesty tells WW. “Regardless of these outsized voices, though, I believe in the majority of Oregonians who are building our next, more inclusive chapter of our state.”

The current campaign has taken a nasty turn.  As the Willamette Weekly further reports, Nov. 6, the Hardesty campaign dug up some past financial contributions records on Gonzalez.  In 2020, he made a $50.00 donation to a Republican candidate for Congress Nate Sandvig who ran in the 6th Congressional District.  The Hardesty campaign sent out a mailer tying Gonzalez to the extreme right. 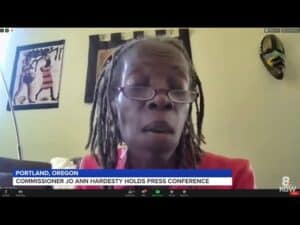 That flier shows an outline of Gonzalez’s profile and then fills in a number of names and phrases that the Hardesty campaign alleges he’s connected to: Marjorie Taylor Greene, Texas Right to Life, and the Oregon Republican Party. “Portland needs positive change, not a HARD RIGHT turn,” the flier read.

[City councilwoman] @KhanhPhamForOR one value that I don’t want city leaders to embody is falsely accusing a brown man of being a White supremacist because he had the audacity to get involved with public service and run against Jo Ann Hardesty. Do you condone this behavior? — Portland Elk Project, Nov. 1

Hardesty herself is in a bit of hot water, over a recent city commission meeting (YouTube, 3:30 minute mark).  At issue, how to combat Portland’s severe homelessness problem.  The commission considered 5 measures.  Hardesty made amendments.  When a white city commissioner questioned her on those amendments, she had a hot mic moment: “What an asshole.”

Be better Jo Ann.
I am the proud son of a Mexican migrant worker, married to a Latina woman, raising 3 biracial children. Working towards a city that doesn't judge people or candidates based on their race.
This election is about restoring livability & safety for all races. https://t.co/nOvZNAD6Ea