Rebecca Wragg Sykes took to Twitter January 12, to praise a new work by British feminist academic Dr. Alice Evans.  Dr. Evans is a Senior Lecturer in the Social Science of Development at Kings College in London. 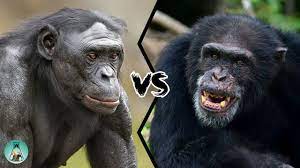 My forthcoming book is “The Great Gender Divergence” (Princeton University Press).  In South Asia, North Africa and the Middle East, it is men who provide for their families and organise politically. Chinese women work but are still locked out of politics. Latin America has undergone radical transformation, staging massive rallies against male violence and nearly achieving gender parity in political representation. Scandinavia still comes closest to a feminist utopia, but for most of history Europe was far more patriarchal than matrilineal South East Asia and Southern Africa.

Evans in a new blog post criticizes patriarchy, largely imposed within the last 10,000 years, with a shift from hunter gatherers to farming and pastoralism.   She is responding to a theory set forth by Richard Wrangham, PhD, Cambridge University. 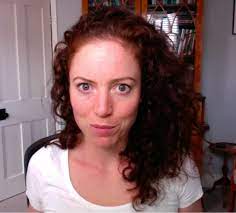 Our nearest relatives (Catarrhini monkeys and apes) are dominated by a singular alpha male. Having physically defeated all others, he becomes an unpunishable, polygnous free-rider, fathering a large share of the offspring. Since the most aggressive male had greatest reproductive success, evolutionary selection amplified aggression. This is a truly Hobbesian state of nature, a “war of all against all”.

Wrangham maintains that… all societies have institutional patriarchy. Hence to truly understand patriarchy, we must focus on how it has been legally institutionalised by the alpha alliance.

The Alpha alliance theory is described as, non-Alpha males cooperating to knock off the Alpha, leading to societies of male-female bonding in place of polygyny:

Over the past ten thousand years, there have been three major waves of patriarchy. These include conquest by Yamnaya steppe pastoralists, the emergence of inherited wealth amid insecurity, and male-organised religions (especially Islam). The stronger the reliance on kinship as well as the greater the concern for purity, the stricter the surveillance, inhibiting women’s freedoms and friendships.

Contra Wrangham, patriarchy was not only imposed by elites, but also emerged as a result of the patrilineal trap, marriage markets, and ever so many boys’ clubs. Wrangham also overstates the universality of patriarchy. African women often maintained powerful alliances.

Neanderthal expert dives into the controversy

Rebecca Wragg Sykes is well-known to readers of this site.   She is a lecturing professor and part-time British Isles archaeologist.  She is best known as the author of the bestseller “Kindred: Neanderthal Live, Love, Death and Art,”  Kindred is available at Walmart.com, Barnes & Noble and Amazon. 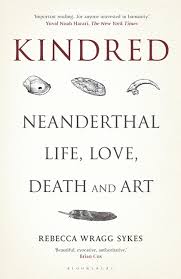 Homo sapiens’ relationship with our long-lost relatives the Neanderthals has undergone a lot of rethinking since our relatively recent reintroduction in 1856. Until then, three years before Charles Darwin published On the Origin of Species, we had no idea that they existed.

Now, a blink of an eye later, we know that many of us – at least, those without sub-Saharan heritage – carry between 1.8 and 2.6% Neanderthal DNA. So it’s reassuring to read that these people whose genes we share were not the brutish caricatures of Victorian myth, but complex, clever and probably caring individuals…

On January 12, Rebecca Wragg Sykes in response to Alice Evans, Tweeted out:

My main issue with such theories is that hyper-violent, xenophobic, male dominant chimpanzees provide the best social model for hominins 300 ka (or any time period).  Bonobos tell us other ways are possible.

Professor Wragg Sykes was likely referring to studies starting in the 1970s and 80s that compared our Bonobo cousins to peace and love lifestyle hippies. 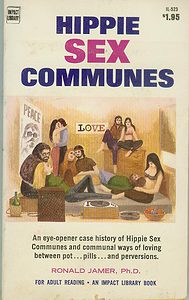 These predominantly peaceful primates — sometimes called “hippie chimps,” as they are known to be less aggressive and more altruistic than chimpanzees — tend to look out for one another and even share their food.

But these courtesies aren’t extended only between bonobos that are already acquainted with each other. Researchers recently found that bonobos would help unfamiliar bonobos reach a food reward, even when they didn’t receive a reward themselves.

Bonobos don’t deserve the honor of being called hippie chimps.  First, Bonobos aren’t constantly loving. They harass each other and fight violently, even to avoid sex.  They just don’t kill each other [like Chimpanzees] probably.  Moreover, they’re not egalitarian, even among the females.. Bonobos are hierarchical, and the lower ranked ones trade sexual favors to get goodies from the more powerful. Is this something humans should emulate? 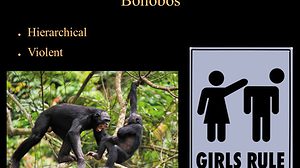 Krupenye and Duke University anthropologist Brian Hare tested a group of 43 bonobos living in a sanctuary in the Democratic Republic of the Congo. In one experiment, 24 bonobos watched a series of cartoons depicting an anthropomorphic circle trying to ascend a hill. The circle was either helped by a triangle or hindered by a square.

The apes were then offered two identical pieces of fruit under a paper cutout of either the “helper” triangle or the “hinderer” square. Like human infants, bonobos could distinguish each shape on the basis of its social behaviors. But unlike humans, they preferred the square.

Rebecca Wragg Sykes in her Tweet thread previews her upcoming book on this very topic.  She Tweeted a response to Dr. Annemieke Milks a British archaeologist who lamented using Chimps as a model for Human societal structures over Bonobos.

Absolutely agree… See my tweet about new books as I’m going to be tackling this topic!