Alfred Russel Wallace, co-discover of Evolution, recognized as a “moderate” on race realism

Alfred Russel Wallace, a Retrospective, on Occasion of the 200th Anniversary of his Birth 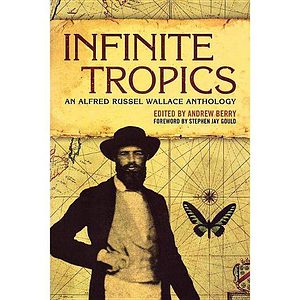 Alfred Russel Wallace, credited as the co-discoverer of  the theory of evolution, was born January 8th, 1823.  Jan. 8th 2023 was the 200th Anniversary of the birth of the famed British naturalist. To celebrate, a multitude of retrospective pieces on his amazing life have come out in a variety of publications worldwide.

Wallace lived an adventurous, even dangerous life.  He started out as an amateur naturalist in the rolling hills of southeast Wales, near the English border.  He collected butterflies and beetles.  At the time, a young man could make a living collecting exotic animal specimens for museums, universities and natural history associations.  Wallace traveled to the Amazon in Brazil.  He spent four years collecting specimens. But tragedy struck.  On his return trip to England, his ship caught fire and he lost his entire collection.

Fortunately, he had gained quite a reputation in the London scientific community and was able to cobble funds together from the sale of two books.  Soon thereafter he launched another exotic excursion, this time to Singapore, and the islands of Indonesia.

Based upon his work, he presented a paper to the (Carl) Linnaen Society. “On the Zoological Geography of the Malay Archipelago.”  As Wallace himself later stated, it was his proudest lifetime achievement.

The paper details a geographic boundary between species originating in Asia and Australian species. The boundary winds between the islands of Indonesia and is known as the Wallace Line. 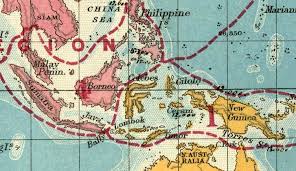 Throughout his stay in southeast Asia and Melanesia, Wallace suffered repeated bouts of Malaria. In 1858 Wallace was staying on the remote Indonesian island of Halmahera, and came down with a particularly bad fever.  He had been immersing himself in reading economist Thomas Malthus’s widely acclaimed, “Essay on the Principles of Population,” published in 1798.

“Population, when unchecked, increases at a geometrical ratio. Subsistence increases only in an arithmetical ratio… [therefore] population must always be kept down to the level of the means of subsistence.”

Wallace applied those fundamental economic principles to local animal species he had seen in both the Amazon and Malay archipelago. He hypothesized, according to London-based anthropologist Dr. George Beccaloni, NY Times Op-Docs, 2016:

“there is constant death and struggle in the natural world… there’s finite resources, therefore competition, so who’s going to win that competition.  Well, the best endowed…”

Or, as described at Sciencing.com:

Wallace realized that this thinking could also be applied to animal species… those least adapted to their environment will die off while the rest, with favorable traits, survive.

Wallace was an extremely spiritual person, even transcendent, something that would impact how his later works were received in academia and the scientific community. (ref. mcdpi.com)

As Wallace recounted to biographers, he experienced a hallucinogenic state while experiencing a particularly high fever on Halmahera.  Malthus’s calculations were fluttering through his mind. Upon recovering, he quickly jumped out of bed, scribbled down some notes, and thus, the theory of evolution was born.

Wallace reportedly had an extreme vision during the hallucinations (is a perception in the absence of external stimuli that has attributes of real perception) caused by tropical fever.

Forever destined to be Number Two 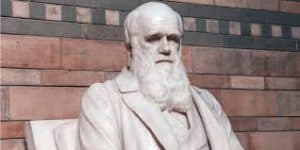 In a historical context, Wallace is widely viewed as the co-discoverer of evolution, not the discoverer.  As the authors of one retrospective piece in Nature note, Wallace didn’t have the necessary pedigree, academic background or connections in London academia, like Darwin had.  And to Wallace’s credit, he recognized his ranking, and deferred to his more credentialed fellow naturalist.

Alfred Russel Wallace’s legacy: an interdisciplinary conception of evolution in space and time

Wallace is recognized as the co-discoverer of the natural selection principle, although for a long time he was relegated to a supporting role, often regarded as the important but secondary “trigger” that prompted Darwin to reveal his theory to the world. Darwin worked on his theory of “descent with modiﬁcations” by natural selection for more than 20 years until he received Wallace’s Ternate paper in early 1858. This put in motion a series of events that led to the joint presentation of manuscripts by Darwin and Wallace in the Linnean Society of London on July 1, 1858 and, about a year later, to the publication of The Origin of Species by Darwin.

As for his deference to Darwin, from Science.org, 2019, Bert Markgraf, 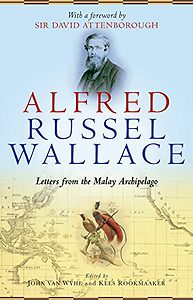 Because he remembered the lack of enthusiasm for his previous paper, Wallace wondered whether Charles Darwin could help him get more attention. He sent the paper to Darwin asking for comments and possibly help in getting it published. He had been in occasional contact with Darwin for several years and knew Darwin was interested in “the species question.”

Darwin was aghast. He had been working on the subject of evolution and an evolutionary mechanism for over 20 years, and his conclusions were almost identical to those in Wallace’s paper. He did not want to be scooped by Wallace but also did not want to unfairly deprive Wallace of his due.

In 1864, Wallace delivered a paper (wku.edu) titled, “The Origin of Human Races and the Antiquity of Man Deduced From the Theory of “Natural Selection,” to the London Anthropological Society. It included this passage where Wallace explicitly hypothesizes that prehistoric man starting out in a “tropical region,” spread out throughout the world, dominated the local environment, and then adapted to that environment, whilst evolving into unique and specialized human species. 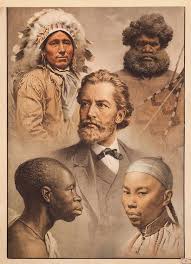 By a powerful effort of the imagination, it is just possible to perceive him [Man] at that early epoch existing as a single homogeneous race without the faculty of speech, and probably inhabiting some tropical region… He must have been even then a dominant race, spreading widely over the warmer regions of the earth as it then existed, and, in agreement with what we see in the case of other dominant species, gradually becoming modified in accordance with local conditions.

As he ranged farther from his original home, and became exposed to greater extremes of climate, to greater changes of food, and had to contend with new enemies, organic and inorganic, useful variations in his constitution would be selected and rendered permanent, and would, on the principle of “correlation of growth”, be accompanied by corresponding external physical changes. Thus arose those striking characteristics and special modifications which still distinguish the chief races of mankind. The red, black, yellow, or blushing white skin; the straight, the curly, the woolly hair; the scanty or abundant beard; the straight or oblique eyes; the various forms of the pelvis, the cranium, and other parts of the skeleton.

In another passage which could be interpreted as Wallace giving consideration the varying views of the day, he wrote:

the better and higher specimens of our race would therefore increase and spread, the lower and more brutal would give way and successively die out, and that rapid advancement of mental organisation would occur, which has raised the very lowest races of man so far above the brutes…

He also mentions the “Germanic races” presumably including Anglo-Saxons, as having “wonderful intelect.”

From another Wallace essay, summarized by ipl.org: 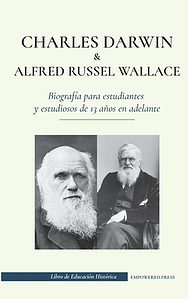 Alfred Russell Wallace’s “Are Humans One Race or Many” powerfully asserts that human races differ in superiority due to the unique environments each group resides in. Through real-world examples, Wallace states that an environment’s “physical peculiarities” are the underlying factors behind both the separation of humans from animals and the superiority of certain races over others (Wallace 218).

Wallace advocates that European superiority arises from their environment: it is the centuries of surviving in comparably abominable conditions that grant Europeans an intellectual, moral, and physical superiority “in the struggle for existence” with the “savage man” (222).

On the occasion of the 200th anniversary of Wallace’s birth

Numerous articles have appeared in celebration of the life of Alfred Russel Wallace since the 200th anniversary of his birth on January 8.  They have all highlighted his commitment to a social justice agenda of his day. Par exemple, France24, 8 Janvier,

[An] advocate of a greater justice social, defender of the right of vote for the women, he warned of the excesses of capitalism and [over] consumption or the impact of the colonization in the regions that he had visited.

A rather lengthy featured essay with multiple authors from various European and Brazilian insitutions, published at Nature.com, touched on some of the controversies,

Alfred Russel Wallace’s legacy: an interdisciplinary conception of evolution in space and time

To be fair, Wallace was a man of his time, immersed in his contemporary cultural and intellectual environments and being right and wrong about different issues (which include moderate views on racism, colonialism, and eurocentrism…

Another Nature essay, Jan. 4, exuded praise for Wallace, but devoted only one paragraph to his European centrism,

Although Wallace’s writings indicate that in many ways he admired most of the Indigenous people he met… he still viewed Indigenous people through the European colonial lens of his time. In A Narrative of Travels on the Amazon and Rio Negro, Wallace describes the Indigenous communities he encountered as “in an equally low state of civilization”

But none of the articles or essays contained vitriol at a level similar to that received by Darwin or especially Darwin’s cousin geneticist Francis Galton, for race realism views.  See our article, from 2020, “Adam Rutherford accuses Darwin and Francis Galton of racism.”

A one day symposium Chaired by George Beccaloni, was held on January 9, at Oxford University,

This one-day symposium aims to celebrate the 200th anniversary of Alfred Russel Wallace’s birth and highlight his contribution to science and society.

It will be held at Oxford University Museum of Natural History in the Westwood room.

Note – The symposium is not yet available on YouTube.  However, the Linnean Society held a similar conference, 4 hours long in 2017 which is on YouTube.  Another good short on Wallace’s life, Island Adventurer, YouTube.