First, some background.  The very first Australopithecus was discovered in a rock quarry in South Africa in 1924.  As Britannica explains: 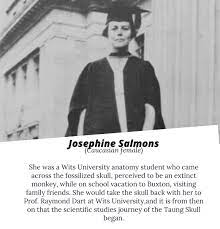 Taung child, the first discovered fossil of Australopithecus africanus. Exhumed by miners in South Africa in 1924, the fossil was recognized as a primitive hominin (member of the human lineage) by paleoanthropologist Raymond Dart.

It was never determined which quarry worker was the one to pull the fossilized skull out of the dirt.

Josephine Salmons was an anthropology student of Professor Raymond Dart at the University of Witwatersrand.  She had a friend whose relative worked as a supervisor at the Buxton Limestone quarry near the town of Taung.  Occasionally, he would bring interesting specimens home.  One of them was a baboon’s skull which he placed on their fireplace mantel.  Ms. Salmons visited her friend and saw the baboon skull. She asked to bring it to her professor.  Professor Dart got excited to see the skull, and requested that his student tell the quarrymen to bring him other similar primate specimens.

Months passed.  A crate arrived at the Dart’s home near Johannesburg.  It arrived at an inconvenient time, his best friend’s wedding day held in the Dart’s backyard.  The wedding went off without a hitch.  Dart raced back inside to look inside the crate.  In the bottom was the fossilized skull encased in Brecchia (cement like hard sand).

Dart worked for weeks separating the Brecchia from the skull using his wife’s knitting needles.  He successfully separated the skull.

Dart presented photos of the skull and an accompanying paper to the Royal Society of England.  The assembled anthropologists were skeptical.  It took years for them to come around.  Many argued it was just a young gorilla.

By the 1930s, the species name was accepted as Australopithecus africanus (southern ape man from Africa). 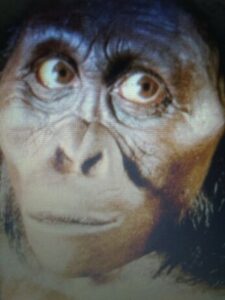 during the early 20th century, workers at limeworks in southern Africa routinely uncovered fossils from the tufa formations they mined. The findings included extinct baboons and other primates. In 1924, workers at the Buxton Limeworks near Taung, South Africa, showed a fossilised primate skull to E. G. Izod who was back then the visiting director of the Northern Lime Company, the managing company of the quarry.

Josephine Salmons back then was a student of the anatomist Raymond Dart, at the University of Witwatersrand. Further, Salmons was a friend of the Izod family and during a visit, she noticed the primate skull displayed on the mantle over a fireplace. She showed the ramainings to Dart who asked the company to send any more interesting fossilised skulls that should be unearthed.

Article on Paleo-anthropology in Spain’s #1 periodical, screws up

On March 4, Spain’s banner paper El País published an article on fame paleo-anthropologist Tim White.  Professor White has decided to move out of California with his wife, and settle in Spain. White has joined the National Research Center for Human Evolution (CENIEH) in Burgos, close to the Atapuerca site where some of the most significant discoveries of fossilized bones of Neanderthals and Homo antecessor have been found in the last 30 years.

‘We don’t know from which creature humans and chimpanzees evolved’ 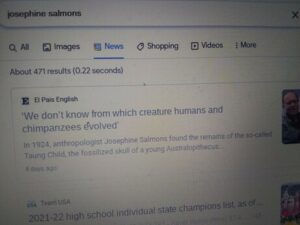 US paleoanthropologist Tim White, a living legend in his field, has moved to Spain to continue his quest to uncover the distant origins of ‘Homo sapiens’…

For 50 years, Tim White has been answering one of the most-fascinating questions faced by humanity: where did we come from? In 1979, when he was still in his 20s, he was one of the paleoanthropologists who announced to the world the discovery of Lucy, the remains of an Australopithecus (a genus of early hominins) a meter tall, and that showed that, despite their small brains, human ancestors already walked upright more than three million years ago in what is now Ethiopia.

In the 6th paragraph of the piece:

In 1924, anthropologist Josephine Salmons found the remains of the so-called Taung Child, the fosselized skull of a young Australopithecus…

There was no mention at all of Professor Raymond Dart.  Subspecieist.com’s editor blasted out half a dozen Tweets to top paleo-anthropologists worldwide in both English and Spanish requesting that they get El Pais to correct the record.  Additionally, Tweets were sent to the author of the piece, Manuel Asende.

On March 8, a new version of the article appeared in Google Searches with the corrected paragraph: 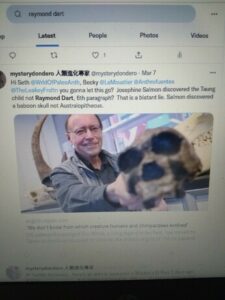 Ethiopia has been described as the cradle of humanity, but so has South Africa. In 1924, anthropologist Raymond Dart found the remains of the so-called Taung Child, the fossilized skull of a young Australopithecus africanus dating from 2.5 million years ago. Tanzania is also considered the origin of everything, and even Morocco, where human remains from 300,000 years ago have been discovered…

The Tweet was sent to the Leakey Foundation, to Rebecca Wraggs Sykes of Neanderthals’ Kindred, Prof. Agustin Fuentes, Seth Chegi of the World of Paleoanthroplogy, Adam Van Arsdale, Roberto Saez, Robert Patalano and others.

Additionally, a Tweet was sent to the prestigious Foundation of Atapuerca, as well.  It read:

The remains of the so-called Taung Child were not discovered by the anthropologist Josephine Salmons, as an earlier version of this article stated, but were in fact found by local miners. Australian anthropologist Raymond Dart attributed the fossils to a new species, ‘Australopithecus africanus.’ Salmons was the person who alerted Dart to the archeological site.

On Sunday, March 6, Subspeciest Editor Eric Dondero joined the Odysee livestream of Canada’s Neanderthal Man, Right-wing Anthropology, to discuss the Raymond Dart controversy.  The first 30 minutes of the show are entirely on Dart.  You can view the show at Odysee.
0 LovesLove Human Evolution No Comments