According to the Washington Post, Tigray rebels based in northern Ethiopia have closed to within 200 miles of the capitol of Addis Ababa which has put “the city and wider region on edge.”  The rebels have just taken the key city of Kemise on the main highway to Addis Ababa.

The War in Ethiopia began earlier in the Summer when government forces led by Aby Ahmed sought to repress rebel outbreaks in the Tigray province.  The Tigray rebels put up a harsh resistance in the mountainous regime and have now pushed forward into neighboring provinces.

Ahmed has responded by instituting a strict conscription of all able-boded males.  He was warned residents to prepare for a siege of the capitol: we will “bury this enemy with our blood and bones.”

Now reports of atrocities and ethnic cleansing.  From NPR,

Rebels are closing in on Addis Ababa. Its collapse could bring regional chaos 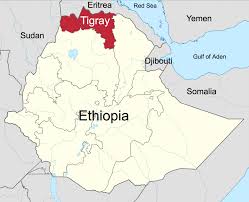 the Ethiopian Human Rights Commission blamed all sides in the year-long conflict for atrocities including extrajudicial executions, torture, rape and attacks on refugees… Amnesty International says Eritrean soldiers slaughtered hundreds of unarmed civilians in the northern Tigrayan city of Axum, “opening fire in the streets and conducting house-to-house raids in a massacre that may amount to a crime against humanity.”

And now the latest on the War in Ethiopia…

The US State Department has issued a warning to all American citizens to flee Ethiopia as soon as possible. the U.S. State Department ordered “non-emergency U.S. government employees and their family members” to leave Ethiopia. The White House has declared the situation in Ethiopia “an unusual and extraordinary threat to the national security and foreign policy of the United States…”

US and other International observers are worried of reprisals by the Tigrayan army and the chaos, rioting and destruction likely to ensue if they capture the capitol in Addis Ababa.

Are precious artifacts at the Ethiopia Museum in Addis Ababa at risk?

The National Museum of Ethiopia is located in the heart of Addis Ababa.  It houses some of the most precious artifacts ever recovered in Ethiopia, including mid-evil period artwork, religious icons, clothing and costumes of past Ethiopian rulers, jewelry, and weaponry.

The first floor houses artifacts, sculptures, dresses, tablets, etc from all corners of Ethiopia; some of them dating to the early days of human civilization. Scripts on tablets of thousands of years of age give one a perspective of looking at the origins of the Ethiopic Feedel right in the face. The war and ceremonial dresses, thrones, and accessories of historical figures also adorn the first floor.

As the Tour of Ethiopia joyofmuseums.com explains further, the precious Lucy is housed at the National Museum.

artistic treasures as well as precious archaeological finds such as the fossilized remains of early hominids, the most famous of which is “Lucy,”. Recently added is a display on Selam, estimated to be 3.3 million years old, considered to be the earliest child.

The museum exhibitions include archaeological,  paleoanthropological, objects from ancient and medieval periods, regalia and memorabilia from former rulers, artwork, a collection of secular arts and crafts. The museum tries to give an overview of the cultural richness and variety of the peoples of Ethiopia. 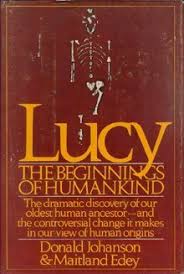 Famed paleo-anthropologist Donald Johanson discovered Lucy on a searing hot August day in 1973, along with his friend, fellow fossil hunter Tom Gray.  Johanson has recounted the story in numerous lectures and in his best-selling book Lucy.  The two of them set out in the Afar region for a day of fossil hunting.  At noon, they headed back to the land rover, but Johanson decided they should take an alternative route back.  A few feet in that direction, he spotted a glaring bone, a partial femur.  They looked around and spotted numerous other skeletal remains.  They knew instantly they had hit the jackpot.

That night, in camp under a tent, the crew danced, drank, and sang while The Beatles “Lucy in the Sky with Diamonds” played over and over again on the tape deck.  The next morning, they dubbed the Australopithecus fossil remains “Lucy.” Fully 40% of the skeleton was eventually recovered.

Continuing from Tour of Ethiopia:

Lucy or AL 288-1 is the fossilized skeletal remains of several hundred pieces of bone fossils representing 40% of the skeleton of a female of the hominin species Australopithecus afarensis. In Ethiopia, the collection is also known as Dinkinesh, which means “you are marvelous” in the Amharic language.

Lucy was discovered in 1974 near the village Hadar in the Awash Valley of the Afar Triangle in Ethiopia. The Lucy specimen is an early australopithecine and is dated to about 3.2 million years ago. The skeleton presents a small skull akin to that of non-hominin apes, plus evidence of a walking-gait that was bipedal and upright.. Due to the risks of damage to the unique fossils,  museums preferred to display casts of the fossil assembly. The original fossils are in Ethiopia all current exhibitions used casts.

Reuters reports, Nov. 3, some museums and archaeological storage facilities in the north of the country have already been threatened.

The year-old conflict in northern Ethiopia has taken a toll on the country’s ancient cultural heritage sites as well as inflictng an enormous human cost.

Some have been damaged by shelling, artefacts have been looted, and countless others are inaccessible to worshippers and pilgrims, according to local residents and priests. Religious leaders say scores of priests have been killed.

Ethiopia Museum in Addis Ababa not the most secure facility

Many critics have noted that the National Museum in Addis Ababa is not well-secured, and artifacts are not kept in the best conditions such as they might be, at a museum in Madrid, Rome, London or Paris. 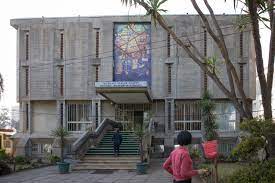 The collection on show at the National Museum is ranked among the most important in sub-Saharan Africa, but sadly many of its exhibits are poorly labelled, lit and displayed. Far and away the highlight is the palaeontological exhibition in the basement, the home of world-famous Lucy. Her 1974 discovery in the Afar region of northwestern Ethiopia changed our understanding of human origins forever…

On the basement level, you’ll find two remarkable casts of Lucy… One lays prone, while the other stands much as she did some 3.2 million years ago, truly hitting home how small our ancient ancestors were. The real bones are preserved in the archives of the museum.

One top curator at the Museum admits, as the War in Ethiopia continues, it could put the Museum’s precious artifacts in peril. Quoted at Reuters:

“Our treasures are in danger at this moment because of this conflict,” said Birhan Yeshiwas, Historical Treasures Curator at the National Museum. “The treasures in our country are very ancient – we cannot find them elsewhere or replace them.”