Chris Rufo sides with race realists, identitarians: Critical of those who say “race is a social construct” 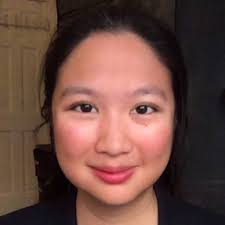 “Alt-right proponents have stated, correctly, that many people with European and Asian descent have inherited 1-4% of their DNA from Neanderthals ancestors, and those of African descent do not have Neanderthal heritage. They are similarly correct that Neanderthals had larger skulls than humans” — Vivian Chou, PhD Philosophy, Harvard Univ., SITN, 2017

Chris Rufo, senior fellow at the free market-oriented Manhattan Institute is having a blast.  His efforts to fight Critical Race Theory in the last year are showing real results.  Republican Glenn Youngkin won his Governor’s race in Virginia largely by adopting Rufo’s opposition to imposition of CRT in Virginia schools, especially in northern VA Loudon County.

From a recent interview with Fox News, Nov. 4,

Chris Rufo calls media denial CRT exists in schools a ‘deliberate strategy’: ‘They have no choice’ but to lie

When asked what it’s like to be such a media target, Rufo grinned, “I love it,” saying the past year has been “fun” clashing with liberal journalists…

“You have Joy Reid putting my picture on her show every night, you have the Washington Post publishing ten articles directly attacking me, you have multiple New York Times articles, including some from the same author over a period of a few months denouncing me,” Rufo said.

“But I think what the record has shown is that I outsmarted them, I out hustled them and then I outplayed them all, demonstrating that if you have hard evidence, if you have a supple mind and if you have a sophisticated strategy, one person with very little institutional support can expose the most powerful institutions in the country, can beat the really dishonest press that attempts to silence you and then provide a model for other people who know intuitively that something is wrong in our country but are not sure how to fight back. And to me, that’s been the lesson.”

Race is Real, or a Social Construct? 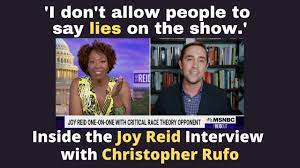 Rufo has been a frequent guest on Karlyn Borysenko’s (pronounced Bory-sch-enko), popular YouTube podcast.  Borysenko is best known for having successfully caused the Coca-Cola corporation to retreat from their anti-white biased CRT training courses for upper and lower management.

But Borysenko, a political centrist with with self-described libertarian leanings, has also been a harsh critic of white identitarians and other pro-white activists.

I’ve got actual white identitarians people calling me every name in the book (lots of anti-semitic ones because they think I’m a Jew), including many slurs… Ever since I stumbled upon the fact that white identitarians were trying to insert the specific term “anti-white” into the anti-CRT space…

In a follow-up covered by her friends at Victory Girls blog, Borysenko wrote: 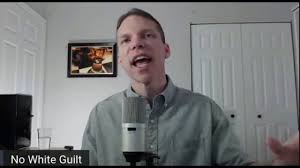 They want me to argue that CRT is anti-white because it’s driving more young white men to these white identitarian movements. It’s dangerous, it’s wrong, and it’s racist. I won’t do it.

Borysenko is right about this. Critical race theory and white identitarianism are two sides of the same coin. They are both poison for our country and should be rejected.

Rufo may be feeling his oats with his new found celebrity status.  Rufo seems to be moving a closer to the views of race realists, and even identitarians who believe human variation is real and can be measured.

In a landmark article, in 2017 just after Donald Trump’s win for the Presidency, Vivian Chou a Doctorate in Philosophy at Harvard University defined race as a social construct,

In the biological and social sciences, the consensus is clear: race is a social construct, not a biological attribute. Today, scientists prefer to use the term “ancestry” to describe human diversity (Figure 3). “Ancestry” reflects the fact that human variations do have a connection to the geographical origins of our ancestors—with enough information about a person’s DNA, scientists can make a reasonable guess about their ancestry. However, unlike the term “race,” it focuses on understanding how a person’s history unfolded, not how they fit into one category and not another.

Responding to a southern California community college creating a category of “Students of color, minus Asians,” for freshman admissions and enrollment, Rufo, who is married to an Asian woman and has two mixed-race children, Tweeted this out on Nov. 10:

Note – Karlyn’s interview on YouTube a year ago with Chris Rufo here.