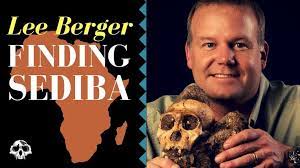 It was supposed to be one of the biggest days of Lee Berger’s career.  Dozens of  other scientists in a multitude of disciplines, from all over the world were participating in the major announcement.  Berger had been teasing the announcement for days on social media.

A day before, Erika of the most highly-rated Paleo-anthropology show on YouTube – Gutsick Gibbon, told Subspecieist.com:

My guess is it’s A. sediba related? He hasn’t published on that hominin in a while, seems apt to me! Plus he fairly straightforwardly implied it’s NOT Naledi related.

Some were clued in.  Paleo-anthropologist Roberto Saenz who we’ve reported on numerous occasions here at Subspeciest, dropped an article on Sediba at his Nutcracker Man blog, several hours before the press release. But Saenz was careful not to give too much away.

It has been long since I last wrote about australopithecines, the unrepeatable hominins from which the human lineage originates. Now, a new study on this species has come to our attention… Australopithecus sediba is a species defined by Lee Berger and colleagues in 2010 for a fossils assemblage found at the Malapa site in South Africa since August 2008, dated to 1.977 Ma. It is an intriguing species of australopithecine, because it is contemporary with the oldest Homo erectus remains (1.95-2.04 Ma) found in Drimolen Cave, a few kilometres from Malapa.

The fossil record of Au. sediba includes two very complete skeletons, MH1 (a juvenile male) and MH2 (an adult female), and other fragmentary remains. The mosaic of derived and primitive features in sediba give it an interesting intermediate or transitional morphology between Australopithecus and Homo.

Australopithecus sediba was first discovered in 2008.  Berger had been using Google maps to identify possible new cave sites in and around areas northwest of Johannesburg that had been considered spent for further human fossil discoveries.  He hit the jackpot one August day, actually it was his son Matthew. They’d been out scouting around one hole.  Berger told 9yr old Matthew, go out and look for fossils.  Within 5 minutes Matthew chasing after his dog, spotted a large rock.  He rolled it over and there were bones attached.  He yelled over to his father.  Berger saw the fossils in the rock, and as he and Matthew relayed it, Berger literally danced a jig.

“The news finds “making [Sediba] a candidate for ancestor of Homo.”

From the Mail&Guardian in South Africa, 2012: 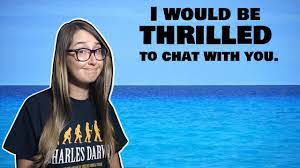 [Sediba at] Malapa, was discovered while [Berger] was out mapping with his dog, Tau. He returned with the dog, his nine-year-old son, Matthew, and Dr Job Kibii and started looking for any obvious signs of fossils.

Matthew soon found bits of a skeleton – of one of the Australopithecus sediba that had fallen into that cave. This child skeleton was dubbed Karabo, because no one can know what its original name was. Karabo means “the answer” in Sesotho.

Further exploration at the Malapa cave site brought additional bones including a skull cap.  But for years afterwards Sediba’s position on the family tree confounded the experts.   Was it Genus – Australopithecus or a Genus – Homo?

Au. sediba has a flatter, less projecting face, no nuchal crest, and some more gracile features… the body size and length of the arms are typical of australopithecines, as is the pelvis in general, although it also has certain modern traits…

sediba has numerous functional systems similar to those of Homo, making it a candidate [for] ancestor of Homo.

There are some complications as to dating of the species, with overlap of Homo erectus.  Also, the brain size is very small at 420cc. (Average Chimpanzee is 350cc).  So, it is premature to declare Sediba on the Homo line.  However, the announcement today by Berger & Team lead us further down that path.

From the Press Release, University of Witwatersand, Johannesburg, Nov. 23, 2021,

An international team of scientists from New York University, the University of the Witwatersrand and 15 other institutions announced today in the open access journal e-Life, the discovery of two-million-year-old fossil vertebrae from an extinct species of ancient human relative.

The recovery of new lumbar vertebrae from the lower back of a single individual of the human relative, Australopithecus sediba, and portions of other vertebrae of the same female from Malapa, South Africa, together with previously discovered vertebrae, form one of the most complete lower backs ever discovered in the early hominid record and give insight into how this ancient human relative walked and climbed.

The fossils were discovered in 2015 during excavations of a mining trackway running next to the site of Malapa in the Cradle of Humankind World Heritage Site, just Northwest of Johannesburg South Africa.

Fossils from the site have been dated to approximately two million years before present. The vertebrae described in the present study were recovered in a consolidated cement-like rock, known as breccia, in near articulation.

The Team dubbed her Issa, meaning protector in Swahili.

“While Issa was already one of the most complete skeletons of an ancient hominin ever discovered, these vertebrae practically complete the lower back and make Issa’s lumbar region a contender for not only the best-preserved hominin lower back ever discovered, but also probably the best preserved,” says Berger, who is an author on the study and leader of the Malapa project. He adds that this combination of completeness and preservation gave the team an unprecedented look at the anatomy of the lower back of the species.

The study concludes that sediba is a transitional form of ancient human relative and its spine is clearly intermediate in shape between those of modern humans (and Neandertals) and great apes.

Berger set his announcement for 3pm Johannesburg time.  Around 3 hours prior to the release, one of his fans Tweeted him an unflattering photo of Georgia Republican Congresswoman Marjorie Taylor-Greene along with a snark.  Berger Re-Tweeted it to his 16,000 Followers worldwide.  Subspeciest.com was able to screen grab the Tweet with help from a member of the Gab social media platform.

It read: “Another sneak peak” 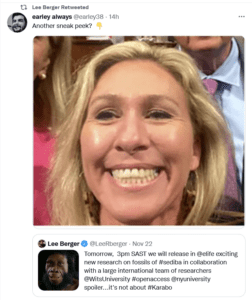