A Hominid skull was discovered 2 years ago in Italy. It was recently dated to 180kya. It is an archaic Homo sapien. This find will upset the timeline for modern Homo sapiens and rearrange Hominid phylogenetic maps when it is released.

The fact that it was discovered in Italy on the European continent will be hugely disruptive to the paleo-anthropology establishment who endorse recent Out of Africa.

The location of the discovery is Sardinia. They are calling it Sardinia 1. Nicknames are often given to Hominid skulls like the famous Lucy. Sardinia 1 will be named Tatana.

Note – They are unsure at this point, if it is male or female, but lean heavily towards female. 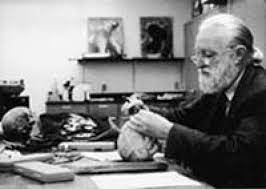 The skull has an interesting backstory.  It was unearthed years ago by a local farmer on his property in southwestern Sardinia, near the coast.  The farmer kept it as a conversation piece.  Recently the new owners turned it over to local historians/antiquities experts.  They concluded it was not contemporary and soon after sought expert advice, including consulting paleontology experts on the Italian mainland.

Alan VanArsdale is a professional precious jewels miner, numismatist and wilderness trekker/archaeologist from Utah.  He spends part of his year living and working in Colorado and Idaho. He is a graduate of the University of California-Berkeley studying sedimentary geology and vertebrate paleontology.  His studies included research on anthropologist C. Loring Brace (photo).  He worked for a brief period in the lab of famed paleo-anthropologist Dr. Tim White.

VanArsdale hosts a popular Facebook group on paleo-anthropology.  He was a guest recently on an episode on the Cave Dwellers, The Neanderthal Mind.

VanArsdale was brought in to consult on the project, specifically on stratigraphy and soil samples. 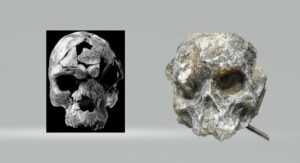 Sardinia 1 shares the net gene flow from the West of Africa with herto, and has even more gene flow from the great Southern Eurasian archaic gene pool than Herto has. So they have a lot in common, but are on other sides of the Arabo-Saharan and Mediterranean partial barriers to gene flow. No “replacements” ever. Just enough gene flow to give a lot of commonality.

Related to the famous Grimaldi Man discovered in the early 20th century?

Asked further about the discovery VanArsdale mentioned similarities with the Grimaldi skeletons found in northwest Italy in the 1920s, from the Gravettian period dated to 26,000 years ago. 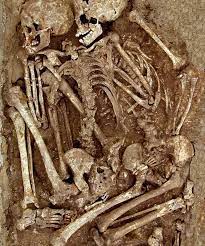 Grimaldi skeletons discovered in Baoussé Rossé one the Cote de Azure. It is debated whether he is neanderthal, cro-magnon, or something else entirely.

He even suggested a direct relationship.

“Grimaldi is from right by the border of France and was near the sea then (as the topography there is rather steep). Yes NW Italy. Grimaldi until the 1960’s, and still in Eastern Europe, was thought to be African due to the high alveolar and mandibular prognathy.”

As a result of Grimaldi together with Homo sardiniensis, he predicts, “Italy [will prove] more central than East Africa to the origin of modern humans.”

Our Interview with Stefano Giovanni Loi of Sardinia, Co-Discoverer of Homo sardiniensis 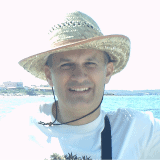 We recently had the opportunity to interview one of of the co-discoverers of Homo sardieniensis – Stefano Giovanni Loi.  (His blog on paleo-anthropology).  He is an antiquities expert and local historian in Sardinia.  He speaks only limited English.
Subspecieist: What is your timeline for announcing the skull?
Stefano Giovanni Loi: Non lo so esattamente, perché il cranio deve essere ancora finito di pulire e sto seguendo le istruzioni di Alan. Non credo che passerà ancora molto tempo. In questo momento ce l’ho io.
(Translation – I do not know exactly, because the cranium has yet to be cleaned and I’m following the instructions of Alan.  I do not believe  still, it will be much time.  In this moment, I have it.)

Subspecieist: Was it really found in a wall with plaster?  Old farmer used it as an art piece? Do we have the story correct?

Stefano Giovanni Loi: Sì, è corretto. L’agricoltore ha raccontato di averlo trovato scavando nel suo terreno. Al momento della consegna del cranio esso si presentava legato ad un fondo di gesso (plaster) e aveva residui di una cornice anch’essa di gesso, come se fosse stato appeso ad una parete. Tuttavia la cultura sarda non prevede la conservazione o l’esposizione di reperti umani, per cui il suo vero utilizzo rimane un mistero. Quindi escludo lo scopo decorativo.
(Translation – Yes, that is correct.  The agriculture specialist had relayed that he had found it digging in his terrain. At the moment of the delivery of the cranium it was preserved in a background of plaster and had residue also made of plaster, like it had been attached to a wall.  Still, the culture of Sardinia does not permit the conservation or the exposition of human finds, so its true uses stays a mystery.  Also, it excludes purposes of decoration.)
Subspecieist: It was found in southwest Sardinia?  Would that be close to Caligiari?
Stefano Giovanni Loi: Sì, è stato trovato nell’area di Cagliari, la mia città natale e la città dove vivo. Esattamente nell’area di Selargius
(Translation – Yes, it was found near the area of Cagliari, my city of my birth and the city where I live.  Exactly near the area of Selargius.)
Subspecieist: Were you the first antiquities/museum/anthropology person to handle it?
Stefano Giovanni Loi: No, però è passato inosservato e successivamente ha attirato la mia attenzione. Il legittimo proprietario, Carlo Desogus, non aveva idea di cosa fosse veramente.
(Translation – No, but it passed time un-observed and successively it had grabbed my attention.  The legitimate owner, Carlo Desogus did not have the idea of what it was true.)
Subspecieist: What did that feel like?
Stefano Giovanni Loi: Premetto che è da molti anni che mi interesso di paleoantropologia. Quando l’ho visto per la prima volta in fotografia ho pensato che chi lo detenesse fosse un burlone. Infatti in quel momento ho detto a me stesso: “non può essere vero”.
(Translation – I’d say that I have for many years interest in paleo-anthroplogy.  When I had seen for the first time in the photograph I had the thought that who kept it was a joke person.  In fact, in that moment I said to my self: No can this be true.” 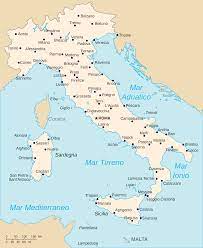 (Translation – The first human beings arrived in Sardinia during the glaciations walking through Tuscany and traversing Corsica.)

Editor’s Note – I am fluent in Italian.  I have traveled to Italy twice – Roma, Pisa, Lucca.

The translation is mine, not from automated translation tools.  My inter-lingual translation style is mostly literal, word for word.  This is sometimes referred too as meta-phrase versus the paraphrase (interpretive) style.  Literal translation style, while intelligible, is not necessarily grammatically correct English.  However, in my view it allows for non-Italian speakers to more easily recognize cognates within each sentence.  An example: “I primi esseri umani sono arrivati…”  to “The first human beings had arrived…”