The Savanna Hypothesis has been riddled in controversy within the world of paleo-anthropology for the last 4 to 5 decades.

What is the Savanna Hypothesis? Simply noted, from rampfesthudson.com:

The savannah hypothesis (or savanna hypothesis) is a hypothesis that human bipedalism evolved as a direct result of human ancestors’ transition from an arboreal lifestyle to one on the savannas.

Note – It is often times referred to as the Open Plains hypothesis.

A controversial and eccentric German geologist/paleontologist from the late 18th century/early 19th century Gustav Steinmann, is largely credited with being one of the first to propose the theory.

His ideas about the evolution of organisms were also extremely speculative… He had diverse interests and ideas combined with a profound knowledge in many fields. He had enormous energy…

His editorial work and the number of his review articles illustrate how much he felt responsible for the geosciences in general. In scientific discussions, Steinmann used his knowledge and excellent memory to argue with sharp-witted comments that often offended his colleagues.

But it is Raymond Dart, ironically also regarded as controversial and outspoken, who mostly popularized the idea.  From the 2012 paper (pdf) by Philip Tobias, et.al. “The Savannah Hypotheses: Origin, Reception and Impact on Paleoanthropology”: 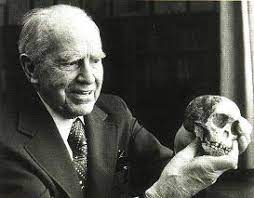 with the discovery of the Taung Child in 1924.the most important reasons for the absence of historical research on the open-plains ideas is related to the notion that the beginning of the SHs seemed to be clearly identifiable. As we will see, the first description of the famous early hominin known as the child of Taung (Australopithecus africanus) by Raymond Dart in 1925 is frequently treated as the beginning of the SHs; the historical events related to this discovery belong to the best-described topics in the history of paleoanthropology…

Part of the controversy stems from Man the Hunter first popularized by novelist, adventurer and amateur evolutionary scientist Robert Ardrey.

The Persistent Myth of Persistence Hunting

Don’t believe the hype. Humans’ prowess at endurance running has little to do with our ancestors’ quest for meat…

The idea of ancient humans as persistence hunters, possessed of superior physical capability, has a certain romance about it and has become very popular with running enthusiasts. Some scientists suggest it can explain several of the evolutionary traits humans have acquired over the past 2 million years. There may be some groups who practice it even today, though that’s hotly debated.

Did Humans Evolve On The Savanna? 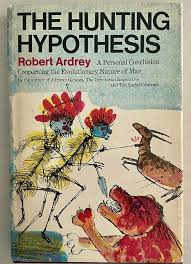 The Debate Heats UpLet’s get into some specifics of the issue at hand. Dominguez-Rodrigo takes up a hypothesis familiar to many of us: Evolution of the human lineage was triggered when a primate population came down out of the trees and encountered new selection pressures on the savanna. Those pressures included a need to move greater distances across the more open landscape, a greater risk of predation and a harder time finding adequate food, and over time they selected, among other things, for walking upright — a hallmark in this context of the human lineage.

This was White’s response:

“Without original research or new data, Dominguez-Rodrigo attempts to resurrect ‘the spirit of the old savanna hypothesis’ via word games and revisionist history … This attempted resurrection of an obsolete mind-set will stand as a monument to futility. — paleoanthropologist Tim White, in response to prehistorian M. Dominguez-Rodrigo’s article on the savanna hypothesis of human evolution, in the February 2014 Current Anthropology.

The debate has heated up yet again, largely due to increased focus in recent years on the origins of bi-pedalism and foot anatomy.

As NPR further explains, a lot of the re-examining of the issue has to do with greater knowledge of Hominids that preceded Homo erectus such as Sahelanthropus tchadensis, Oriorin tugensis and most especially Ardipithecus (Ardi), which was discovered by Dr. White’s team in Ethiopia. 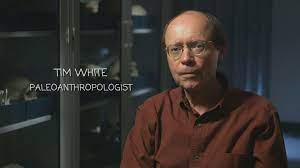 In recent years, the savanna hypothesis was challenged by the discovery in dense woodlands of certain hominins (human ancestors), early ones like Ardipithecus who lived in East Africa more than a million years before the australopithecine Lucy.

Dr. Daniel Lieberman has become a pop figure of sorts, for his books on health and the philosophy of running.   Continuing from Undark.org:

Harvard paleoanthropologist Daniel Lieberman. “As for anatomical, genetic, and paleontological evidence, there are so many derived features of humans that make us good at running and which have no other function, they clearly indicate humans were selected for long distance running,” Lieberman wrote in an email. He has noted that those features — arched feet, short toes, wide shoulders, long Achilles tendons — seem to have originated around 2 million years ago, around the time when the genus Homo evolved and our ancestors began making meat a regular part of their diet. Persistence hunting, he’s argued, might have been the evolutionary driver.  [Emphasis added]

However, Dr. Liebermann’s hypothesis rests on dates of 2 million years ago which is a full 4 million years after our human species diverged with the Chimpanzees and Bonobos. The 2 million year old dates on which he relies, would be Homo erectus, not Ardi, Sahelanthropus or Orion tugensis.

We reached out to evolutionary scientist, archaeologist and world trekker Dr. Robert Patalano of the Max Planck Institute for Human Origins Research in Leipzig, Germany, for his views on the subject.

“The genus Homo really excelled at acquiring resources from a wide range of habitat types and environmental settings and multiple climate zones and ecoregions within and beyond Africa.” – Dr. Robert Patalano 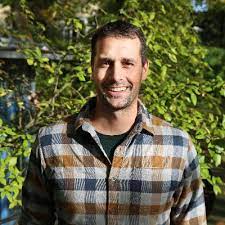 My research lies at the intersection of paleoanthropology, paleoecology, and geochemistry and combines traditional archaeological field methods with area-defining laboratory techniques.

I have had the privilege of travelling and doing research in the Bahamas, across Canada and the United States, China, South Africa, Spain, Tanzania, and Zimbabwe, and working in archaeological context ranging from 2 million years ago in eastern Africa to 2000 years ago during the Han Dynasty in China.

I earned my PhD in Archaeology from the University of Calgary, Alberta Canada. For my dissertation, I focused on the environmental context of the earliest Acheulean at Olduvai Gorge, Tanzania, and how early humans responded to different climate and environmental conditions roughly 1.7 million years ago. This was part of the Stone Tools, Diet, and Sociality project, Canada’s leading research partnership interested in the science of human evolutionary ecology.

Climate and environmental change are the backdrop in which humans evolved. However, it is not so straight forward as the plant landscape opening up, thus driving human evolution.

Note – C3 simply refers to grasses that are adapted to a seasonal environment, including cooler weather, whereas C4 would be plants consumed by Hominids in a tropical environment.

In southern Africa, Au. africanus likely had access to forests, ecotones, wooded grasslands, and grasslands, and Au. sediba made use of C3-dominated microhabitats within a regional environment of abundant C4 grasses ∼2 million years ago.

The genus Homo really excelled at acquiring resources from a wide range of habitat types and environmental settings and multiple climate zones and ecoregions within and beyond Africa.

Editor’s note – We are grateful to Dr. Patalano’s providing us this excellent explanation and his view on Savanna Hypothesis.  Cover image YouTube – Savanna grassland biome video.