Fredrick Kyalo Manthi on a podcast of Leakey Foundation Lunch Break Science, tells the host something big is coming

Dr. Frederick Kyalo Manthis is Director of the Sites and Monuments Department at the National Museum of Kenya.  He is also the director of the West Turkana Paleo Project.

Dr. Manthis has an interesting history in paleo-anthropology.  His father worked directly for Meave Leakey out in the field in Lake Turkana and other archaeological digs across Kenya.  Kyalo Manthis was with his father on a number of those digs.  That includes the famous Turkana Boy.

As he tells it at PrehistoryKenyaClub.org: 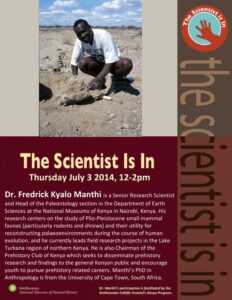 The evolutionary history of humans and that of other biological species captivated me at an early age. This was particularly shaped by the many books I read on African prehistory, which were availed to me by my father who worked with the late Dr. Mary Leakey at Olduvai Gorge, Tanzania.

Whenever my father came home for his holidays, he would narrate to me stories on prehistory, and the excavations they were undertaking at Olduvai Gorge. This fascinated me even further, and helped in nurturing my desire to become an archaeologist some day.

I studied in rural schools in Kikoko Location, Kilome Division of Makueni District. After my Certificate of Primary Education (CPE) in 1981, I joined Thomeandu Secondary School, where I sat for my “0” level examinations in 1985, scoring a very strong Second Division. My studies were suddenly interrupted by lack of school fees. Giving up on my studies was, however, not an option.

My dream to pursue the career I most desired was rekindled a few months after, when the then head of the National Museums of Kenya (NMK), Dr. Richard Leakey, offered me employment at the NMK. I started working at the NMK in June 1986, and my duties included prospecting for fossils in different sites across the country, as well as the curation of the same in the NMK laboratories in Nairobi.

Since 1986, I have been involved in many archaeological, palaeontological and geological expeditions in different parts of Kenya. The most memorable moment in the field came on the 5th August 2000, when I discovered a human (Homo erectus) cranium, which together with other fossils of H. habilis has changed the traditionally held theory that H. habilis gave rise H. erectus in a linear succession manner. These new discoveries suggested that the two species co-existed for nearly 0.5 million years, but would have exploited different ecological niches.

Most recently Dr. Kyalo Manthi was a co-author on an African genome study that gained a great deal of attention in the science media, 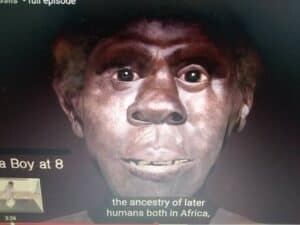 The study looked at: “ancient DNA data for six individuals from eastern and south-central Africa spanning the past approximately 18,000 years.”  The study found a “well-established three-way cline of eastern-, southern- and central-African-related ancestry,” divergence within the late Pleistocene 80,000 to 20,000 years ago.  It determined that eventually, African settled into three regions with largely separate populations.

“Our genetic study confirms an archaeological pattern of more local behavior in eastern Africa over time,” said Jessica Thompson, an assistant professor of anthropology at Yale University, an author of the study and one of the researchers who uncovered the remains. “At first people found reproductive partners from wide geographic and cultural pools. Later, they prioritized partners who lived closer, and who were potentially more culturally similar.” 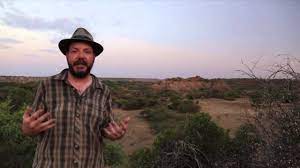 On February 17, Dr. Kyalo Manthi was a guest on the Leakey Foundation weekly podcast, Lunch Break Science.  Arielle Johnson is the host.  At the 16 minute mark, they begin discussing some of Dr. Kyalo Manthi’s new and exciting projects.

Dr. Kyalo Manthi talks of his work at the Omo Kibish site in Ethiopia which has been in the news of late, with the re-dating of the Omo 1 fossil skull from 195,000 years ago to 233,000 years.  Omo 1 is now officially the oldest confirmed Homo sapien skull.  Herto Man, from a site further north in Ethiopia, is dated at 160,000 years ago. (Jebel Irhoud at 320,000 years is contested having a mix of Hominid features).

The research paper “Age of the oldest known Homo sapiens from eastern Africa,” was published in the journal Nature, on Jan. 22.

See John Hawks’ video on YouTube explaining the importance of the fossil finds at Omo Kibish and the surrounding topography.

“The brain sizes [Omo 1 and Omo 2] are relatively large. They have brain sizes that are right within the human range. Second, the brow ridges on these specimens are greatly reduced…”

the skull’s flat face, prominent chin and high forehead were distinctly modern, and that this ancient person should be classified as a member of our own species.

After summarizing his recent projects, Dr. Kyalo Manthi gives a preview of what’s in store.

Kyalo Manthi: I’ve received a lot of support for research from the Leakey Foundation which allowed me to carry a lot of research in the Turkana basin… In the western part of Lake Turkana I’ve had some wonderful wonderful discoveries in the past 15 years or so.

And I’m pretty sure that uhh… very soon that you learn more about some of our wonderful.  I don’t want to preempt, but umm, there we’ll be making some very good, some wonderful announcements, hopefully.  I don’t want to talk about it [unintelligible].

Arielle: Keep us posted on the discovery.

Kyalo Martni: Exactly, we’ll do that. Especially on the Kibish formation.  It dates to around 200,000 years ago. And I’m pretty sure that very soon you will find… I mean, the print media, and we will all kind of celebrate this wonderful discovery.  But I don’t want to preempt that right now. But keep your eyes and ears open.

Note – at that point Arielle Johnson looks giddy with excitement. 16 minutes in the video, YouTube.