Homo longi was dubbed Dragon Man due to the location of the find near the “Dragon” river in northeastern China.  It made quite a splash in the media worldwide.

From the Smithsonian Magazine, June 25:

[In China] a farmer made an unusual donation to a university museum—a giant, nearly intact human skull with strange proportions and an unusual backstory… unearthed at a construction site in Harbin nearly 90 years ago.

After geochemical detective work to locate where the fossil was likely found, and painstaking comparison of its distinctive features with those of other early humans, some of the scientists investigating the find believe the cranium from Harbin could represent an entirely new human species—Homo longi or “Dragon Man.” If so, they further suggest it might even be the human lineage most closely related to ourselves.

Paleo-anthropology experts now believe there may be 3, possibly even 4 subspecies of Denisovans.  The original Denisovan found from the girl’s pinky bone, and other fragments from the Denisova cave,  was dated in 2010.  Some have dubbed it – Siberian Denisovan.  There is also one, possibly two Denisovan subspecies in southeast Asia and Melanesia.  Could the discovery at Harbin present a 4th branch?

Continuing from the Smithsonian:

“The discovery of the Harbin cranium and our analyses suggest that there is a third lineage of archaic human [that] once lived in Asia, and this lineage has [a] closer relationship with H. sapiens than the Neanderthals,” says Xijun Ni, a paleoanthropologist at the Chinese Academy of Sciences and Hebei GEO University. If so, that would make the strange skull a close relative indeed since most humans today still have significant amounts of Neanderthal DNA from repeated interbreeding between our species.

Tom Higham is a professor of evolutionary anthropology in the UK.  His official title: Professor of Archaeological Science and Deputy Director, Oxford Radiocarbon Accelerator Unit; Fellow of Keble College.  He recently switched to the University of Vienna.

Professor Higham’s research interests focus on archaeological dating, including the radiocarbon dating of bone, as well as the chronology of Palaeolithic Europe. He is involved in a variety of projects investigating the human occupation of Britain and Europe over the last million years and the potential co-existence of Neanderthals with early modern humans.

Higham’s recently conducted a groundbreaking study on Neanderthals and what might have led to their disappearance:

A research team, led by Professor Thomas Higham of the University of Oxford, has constructed a robust timeline showing when the last Neanderthals died out. Significantly, they have strong evidence to suggest that Neanderthals disappeared at different times across Europe rather than being rapidly replaced by modern humans.

Professor Higham recently appeared on an episode of Seth Chagi’s World of Paleo-anthropology. 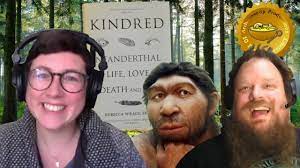 Some colleagues of our’s from Australia… were using dating methods that could date things much older than radio carbon. Back to 300,000 even 400,000 years ago… Working with them in tandem we were able to build a sort of composite chronology of  how the site built up… we decided one of the only ways to date these key fossil remains was to try to use a clever statistical technique based on baysian method… we incorporated mitochondrial date information… So we used these sequences, and sediment sequences, to provide dates for Denisovan 4 and Denisovan 3.  And the other important Hominid remains. And we succeeded in doing this. So for the first time we were able to give age estimates… So we know now that Denisova 3 is just before 50,000 years ago… and Denisova 4 is about the same age.

Subspecieist.com had the opportunity to catch up with Professor Higham, (Oct. 26, Twitter) and pose a few follow up questions.

You seemed reluctant at first to name Homo longi as Denisovan, but then sort of agreed Longi was Denisovan offshoot.

I think it is more likely to be Denisovan, but until we get DNA it is wise to be cautious. That said the remaining Harbin (longi) tooth has close similarities to Denisovan material from the site, and to Xiahe as well, so it seems to make some sense that it is.

Then Tom Higham added this observation:

There appear to be 2 Denisovan peaks in New Guineans from one popn. closely related to Siberian Denisovans and another from perhaps east of Wallace’s line. A different research group found 2 but perhaps a third as well. This is based on modern human DNA analyses.

Professor Higham’s new book is The World Before Us: How Science is Revealing a New Story of Human Origins. Brief:

50,000 years ago, we were not the only species of human in the world.There were at least four others, including the Neanderthals, Homo floresiensis, Homo luzonesis and the Denisovans. At the forefront of the latter’s ground-breaking discovery was Oxford Professor Tom Higham. In The World Before Us, he explains the scientific and technological advancements – in radiocarbon dating and ancient DNA…

And someone well-known to regular visitors of Subspecieist:

“Tom Higham brings us to the new frontier of the remarkable new science of palaeoanthropology, from lab bench to trench” — Rebecca Wragg Sykes, author of Kindred

Prof. Higham’s book is available at Amazon.com and other outlets.