Sahelanthropus tchadensis no longer deemed a Hominid by paleo-anthroplogy experts 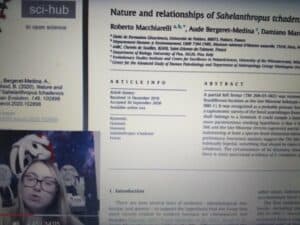 Sahelanthropus means “Hope of life” in the local Ghouren language of Chad.  Tchadensis simply means “From Chad.”  Chad is a relatively large country in north Africa, west of the Sudan, Ethiopia and Somalia.  Of course, Ethiopia is the site of numerous Hominid fossil finds in the last 40 years, including the famous Lucy – Australopithecus afarensis in the Afar region.  Lucy is dated to be 3.1 million years ago and is widely considered to be in the direct line of modern human ancestors.

The positioning of  Hominid species on the phylogenetic tree of  pre-Australopithecines causes a great deal of controversy.   Of course, much of the controversy stems from a simple lack of fossil evidence and the obvious absence of any DNA samples.

Has an Early Human Relative been Evicted from the Family Tree?

Sahelanthropus tchadensis is not without controversy.   And said controversy has only grown with time…

The 6 million to 7.5+ million year time frame is when it is estimated our divergence from our Chimpanzee and Bonobo cousins occurred.

Sahelanthropus tchadensis was first discovered in 2002 by a Frenchman archaeologist Michael Brunet of the Centre National de la Recherche Scientifique.  A pretty intact skull and some scattered jaw fragments were unearthed in the Chadian desert.  At first, Brunet made some fantastic claims, famously asserting that the fossils represented “the earliest known hominid,” and that it should be considered “as the ancestor of all later hominids.”

As Gibbon points out, Sahelanthropus tchadensis was crowned the first bi-pedal Hominid by the foreward appearing Foromen magnum, the rounded opening for the spine in the human skull.

Later on he tempered his earlier remarks, stating that the fossil remains were “close to the last common ancestor of humans and chimpanzees.”  (EvolutionNews.org Feb. 2021)

Brunet also raised suspicions among other paleo-anthropologists, delaying examinations of a femur bone found nearby with the skull and jawbone fragments.  Some heavy hitters weighed in. 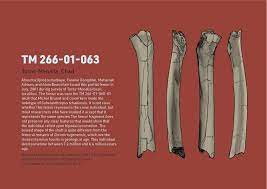 [Brunet’s] claims have led to much disagreement in the paleoanthropology community. Brigitte Senut, of the Natural History Museum in Paris, called Toumai “the skull of a female gorilla,” and co-wrote in Nature, along with Milford H. Wolpoff, Martin Pickford, and John Hawks, that “Sahelanthropus was an ape,” not bipedal, and that many features “link the specimen with chimpanzees, gorillas or both, to the exclusion of hominids.” This debate has continued.

Roberto Macchiarelli was the first to raise concerns.  He co-authored a paper along with three other scientists including Bernard Woods.  Woods, of course, is best known for having been on the original Lucy team in 1973 with Donald Johanson.

Nature and relationships of Sahelanthropus tchadensis

A partial left femur (TM 266-01-063) was recovered in July 2001 at Toros-Menalla, Chad, at the same fossiliferous location as the late Miocene holotype of Sahelanthropus tchadensis (the cranium TM 266-01-060-1). It was recognized as a probable primate femur in 2004…

The differences between TM 266 and the late Miocene Orrorin tugenensis partial femur BAR 1002′00, from Kenya, are consistent with maintaining at least a species-level distinction between S. tchadensis and O. tugenensis. The results of our preliminary functional analysis suggest the TM 266 femoral shaft belongs to an individual that was not habitually bipedal…

Our supposed earliest human relative may have walked on four legs

AFTER more than a decade in limbo, a crucial fossil of an early human relative has finally been scientifically described. The leg bone suggests that Sahelanthropus tchadensis, the earliest species generally regarded as an early human, or hominin, didn’t walk on two legs, and therefore may not have been a hominin at all, but rather was more closely related to other apes like chimps.

Barring any further Hominid fossil finds in the 5 million to 7 million time frame, as of now Orrorin tugenensis has the title of First Human.

Orrorin tugenensis has been in the news in the last few weeks.

Climate Change, desertification of the Sahara likely caused a migration of a primate species into southern Europe 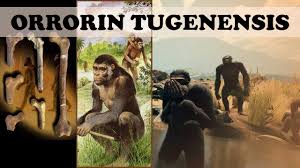 The oldest known footprints of pre-humans were found on the Mediterranean island of Crete and are at least six million years old, says an international team of researchers from Germany, Sweden, Greece, Egypt and England, led by Tübingen scientists Uwe Kirscher and Madelaine Böhme of the Senckenberg Center for Human Evolution and Palaeoenvironment at the University of Tübingen…

Recent research in paleoanthropology also suggested that the African ape Sahelanthropuscould be ruled out as a biped, and that Orrorin tugenensis, which originated in Kenya and lived 6.1 to 5.8 million years ago, is the oldest pre-human in Africa, Böhme says… the second-phase sealing off of the continents by the Sahara 6 million years ago could have enabled a separate development of the African pre-human Orrorin tugenensis in parallel with a European pre-human… successive short-term desertifications in Mesopotamia and the Sahara caused a migration of mammals from Eurasia to Africa.

This places the Trachilos footprints in Crete at around the same age as the fossils of the upright-walking Orrorin tugenensis from Kenya… Six million years ago, Crete was connected to the Greek mainland via the Peloponnese. According to Professor Madelaine Böhme from the University of Tübingen, “We cannot rule out a connection between the producer of the tracks and the possible pre-human Graecopithecus freybergi.”

Orrorin tugenensis in Greece?  Or, the footprints belonging to Graecopithecus freybergi?  Either way, it suggests modern human origins may not be Out of Africa as originally believed, but rather more OoSE (Out of Southern Europe).

Editor’s note – First in a series.  Next up Orrorin tugenensis.