Noted Austria-based geneticist/archaeologist Katerina Douka makes a stunning statment on the new  human fossil find in Laos.  But first some background on Denisovans from our article here at Subspecieist, November 2021,

Denisovans were first discovered in 2008.  A Russian archaeological team had been surveying the Denisovan cave in southern Siberia.  The Russian team came across a curious fragment of a pinky bone that appeared to be Hominid.

Naturally they believed it to be a Neanderthal and wanted confirmation. They relinquished the bone fragment to Svante Pääbo and his team of DNA researchers at the Max Plank Institute in Leipzig, Germany.  Lab assistant Johannes Krause, well-known to regular readers of this site, sequenced the fragment. They didn’t fit with Neanderthal DNA sequences.  Krause had discovered a new species of Hominid.

With agreement from the Russian team, the Hominid was dubbed “Denisovan” by Krause and Pääbo after the name of the cave in Siberia.

Two Denisovan teeth, and a skull bone fragment were found soon thereafter.  And then a year later, a jawbone from another cave, 50 miles away was identified as Denisovan.  Ironically, the jawbone had been sitting in a vault at a Chinese museum, unidentified for decades.

Now a new major find has just been announced from southeast Asia.  A hollowed out molar was discovered by a team in 2018 in a the Tam Ngu Hao cave in Laos. 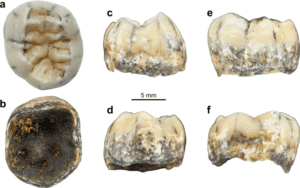 Fantastic find, yes.  If the mandible of Xiahe is Denisovan, this molar is of course a candidate to be Denisovan also.

Local Laotian children frequently played in the cave.  Tam Ngu Hao is named Cobra Cave for the abundance of the deadly snakes that make it a home.

The kids alerted local archaeology enthusiasts that there were bones of various mammals scattered all over.  An organized dig ensued and the molar was discovered in a cave wall, embedded in breccia.

Laura Shackleford of the Univ. of Illinois, Fabrice Demeter and Clement Zanolli involved in the archaeological discovery, announced their amazing find in their paper just published by Nature, May 17,

Here we report a Middle Pleistocene hominin specimen from Laos, with the discovery of a molar from the Tam Ngu Hao 2 (Cobra Cave) limestone cave in the Annamite Mountains. The age of the fossil-bearing breccia ranges between 164–131 kyr…

Analyses of the internal structure of the molar in tandem with palaeoproteomic analyses of the enamel indicate that the tooth derives from a young, likely female, Homo individual. The close morphological affinities with the Xiahe specimen from China indicate that they belong to the same taxon and that Tam Ngu Hao 2 most likely represents a Denisovan.

The paleo-anthropological community is ecstatic over the find, as it fits previous models for geographic ranges for Denisovans, mostly based on DNA genomic studies of Asian and Melanesian populations.

Denisovans seem to have interbred with the first wave of AMH [Anatomically Modern Humans] as they passed through southern Asia after leaving Africa. These humans already carried neandertal genes from having interbred with them… modern human populations that have descended from those early humans (i.e. indigenous Melanesians, Polynesians, Australians, and some Filipinos) carry 4.8% Denisovan genes, along with the mean of 2.5% neandertal genes that all Eurasians possess, meaning that a total of ~7% of their genes are derived from extinct hominins!

Denisovan, Neanderthal or perhaps another entirely new archaic Hominid as of yet unknown to science? 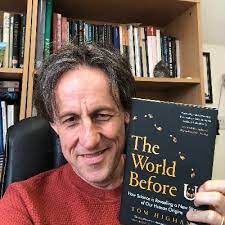 But other top paleo-anthropologists say it’s too early to reach a firm conclusion.  Chris Stringer of the London Natural History Museum, suggests it could be a Neanderthal-Denisovan hybrid.

A Neandertal origin cannot be ruled out, which would astonishingly expand the range of this human species by some 4000 km southeast of Denisova cave.

Katerina Douka who we have covered extensively at this site over the years, along with her archaeological partner geneticist and carbon dating expert Tom Higham, wonders if the tooth could belong to a yet-to-be-discovered Hominid.

From the Smithsonian Magazine, May 18, 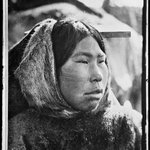 Researchers believe the tooth belongs to a Denisovan girl, making it the first fossil evidence of these hominins in Southeast Asia…

“There is a chain of assumptions the authors accept in order to confirm that this is a Denisovan fossil,” Katerina Douka, an assistant professor of archaeological science at the department of evolutionary anthropology at the University of Vienna, tells CNN’s Katie Hunt. “The reality is that we cannot know whether this single and badly preserved molar belonged indeed to a Denisovan, a hybrid or even an unknown hominin group. It might well be a Denisovan, and I would love it to be a Denisovan, because how cool would that be? But more confident evidence is needed.”

The hunt for answers has just begun.  Continuing from Smithsonian:

The authors [of the research paper] plan to continue searching the cave in Laos for more fossils and hope to extract DNA from the molar to confirm its owner.