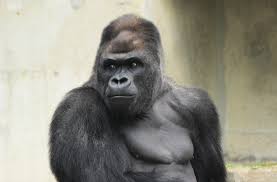 Adrian Dane Kenny – “We evolved from other apes, other hominids.  We are apes.. it’s not a derogatory thing, it’s just a fact”

According to his bio on Google, Dr. Kenny was born in Kingston, Jamaica.  He is a graduate of Harvard Medical School.  He is an intern at Yale New Haven Hospital and Waterbury Hospital with the Yale Primary Care Program.  He is also the author of “Waiting for Death” available on Amazon.

“Race is definitely real. I do know some anthropologists speak against the reality of race, just a social construct, but after researching… I started to realize there really are differences. There are white people who are very white… and there are black people who are clearly very black.”

Anyway the point is whites, Caucasians are more related to Rhesus Macaque.  This is kind of my conclusion, kind of my hypothesis now.  Whereas black-skinned humans are more closely related to gorillas.  And that’s the biggest divide.” [Emphasis added]

Dr. Kenny goes on to talk about the differences in noses between whites and blacks, pointing out that whites for the most part have “pointier” noses.

“There’s genetic and phenotypic variation on noses… it’s all because of evolution… Whereas blacks have broader noses. No doubt about that.  There are blacks, black-skinned people who do have straight-ish noses, more European looking noses too.  But again that has to do with convergent and divergent homologous evolution.”

Note – Clines: a gradation in one or more characteristics within a species or other taxon, especially between different populations.