A recent press release from the lab, suggested that IQs in genetically engineered babies from new CRISPR technology could increase IQs as much as 3 percent.

“The ability to do genomic sequencing of embryos is much easier than it was even five years ago, and we know many more gene variants linked to certain traits,” says co-corresponding author Shai Carmi, of the Hebrew University of Jerusalem.

Carmi’s team looked at the feasibility of selecting embryos based on each of two traits caused by multiple genes–IQ and height…  they chose to focus on IQ because it is frequently brought up in concerns regarding eugenics… Their findings suggest that our current knowledge of the genetics of these types of traits may not be enough to generate a substantial increase in the desired traits in an IVF embryo selection scenario….

For IQ, the most it increased above the average of the embryos was three points…

Interestingly as Eureka Alert notes, their studies seem to suggest some complexities, including the possibility that selecting for higher IQ might adversely affect selecting for increased height or vice versa.

“The ability to do genomic sequencing of embryos is much easier than it was even five years ago…” — Prof. Carmi 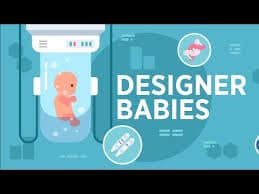 “There is much about these traits that is unpredictable,” Carmi said. “If someone selected an embryo that was predicted to have an IQ that was two points higher than the average, this is no guarantee it would actually result in that increase. There is a lot of variability that is not accounted for in the known gene variants.”

Of particular interest to readers of this website, one left-leaning publication that often covers genetics, expressed worries of race realism creeping in.

The trait most commonly considered for such enhancements is IQ. However, despite the discredited claims (sic) of “race realists”, we know very little about the genetic variations that contribute to this, probably because there are so many, each with a minor effect. Carmi ran a simulation by picking real couples as theoretical parents, with each passing a random half of their DNA to 10 embryos.

Carmi found picking the potentially smartest embryo would raise the IQ of the child by 2.5 points – not trivial, but not something most would consider worth the enormous cost.