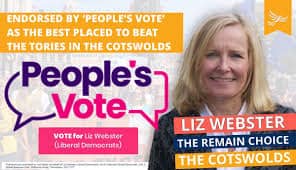 Liz Webster, as a member of the Liberal-Democrats, has represented The Cotswalds as a Member of Parliament since 2017.  She represents Gloucestershire, in the southwest of England, a stunningly bucolic, mostly rural and farming area.

Webster is a hardline Remainer and visceral critic of Boris Johnson and the Conservative Tories.

[Brexit has eroded] the rule of law and threatening the economy, public services and civil liberties. We must amplify our message that the Liberal Democrats want to stop Brexit by demanding a final say on the Brexit deal.

An exit from Brexit will boost growth, wages, business investments and tax revenues. We are also the only Party which will bring fairness and opportunity to all, building a tolerant and open Britain in which everyone is able to fulfill their potential.

Final results are in.  MP Webster got beaten severely in the recent election.

Now she is lashing out.  In a Tweet, dated December 14, she blamed Social Darwinists for her defeat.

“This brand of nationalist, strong arm Tory who won power believe in survival of the fittest.  They believe in services on a pay as you go basis because they don’t like the thought of paying to help someone else.”

She goes on to compare the Tories to far right activist Tommy Robinson.

“Many support eugenics.  And fascists like Tommy Robinson back them.”

Robinson is actually a longtime supporter of UKIP.

It would appear that MP Webster lifted her remarks from a far left-wing UK blog Scramnews, that published an article on Tommy Robinson, Dec. 10,

The theory is shared among the far-right, but some Brexit Party candidates are also linked to it, including Dionne Cocozza, who shared posts about a “Muslim takeover” of Britain…

This pro-eugenics type rant has no place in British conversation. Robinson should stay offline and get back to one of his many court cases.

Cocozza was a place-holder candidate in Scottland for the Brexit Party in a far left-wing district of Glasgow, Scotland.

From the neweuropean, Nov. 21, before the election,

In one screenshot purportedly from Cocozza’s account, she retweeted a Twitter user who said: “Sorry but I heard a Muslim say, we get elected then slowly we takeover. Happened in Belgium, Sweden and Germany.”

UPDATE! Liz Webster was going to run for a local town council seat on the Liberal-Democrat ticket in May of 2021. But she stepped aside for unspecified “personal reasons.”

In endorsing Dr Brian Mathew and explaining her decision Liz Webster said: “Having had some time to reflect since the botched Wiltshire & Swindon PCC election, I am sorry to disappoint supporters and announce I will not be putting my name forward to be the Liberal Democrat candidate in the Wiltshire and Swindon Police and Crime Commissioner By-election on Thursday, August 19.