On March 29, Congressman Jamaal Bowman, Democrat of the 16th District of New York, Tweeted out this Cartoon: 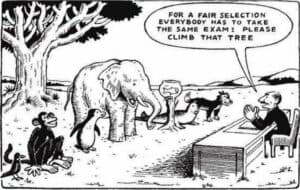 “Our education system and the problem with standardized testing.”

Here are a few comments of particular interest to readers of Subspecieist.com all in the Jamaal Bowman thread on Twitter: 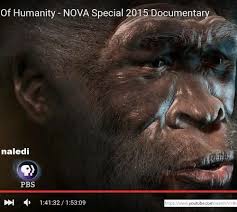 “Except aren’t we all the same species of animal…?” — Michelle Tandler, 15.4k followers, a “moderate Democrat” from San Francisco

Weird Hiker replied – “Yeah but there is enough introgression between Denisovan, Neanderthal, and archaic groups to argue Jamaal’s point.”

“Whites, Jews and Asians have higher than average IQs, so they perform better on standardized tests than all other ethnic groups.  Not all races perform on the same level.”

“I’m concerned about the author of the cartoon and those who think it makes a good point.  Children aren’t different species of animals with fundamentally different designs.”

Bowman got some limited national media attention, including Hotair.com and Fox News, national and local affiliates. 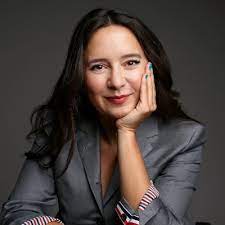 But making that point about racial disparities by borrowing an analogy to animals, which have different innate abilities because they’re literally different species, is … not a good analogy… Imagine how deep in the weeds of racial essentialism you need to be to miss Blum’s point and push a cartoon that would fit comfortably on an alt-right message board. [Emphasis added]

Bowman, a former middle school principal who earlier this month called testing “a pillar of systemic racism,” shared a political cartoon on Twitter Monday that depicts a row of animals in front of a tree. The animals include a bird, a monkey, a penguin, an elephant, a fish, a seal, and a dog.

Some further reactions as noted by Fox:

“You’re suggesting different students given a standardized test are like … different species? Are you kidding me with this?” Atlantic staff writer Conor Friedersdorf asked.

“‘Asking a [B]lack person to pass a test is like asking a goldfish to climb a tree.’ Who said it: David Duke or Jamaal Bowman?” PJ Media columnist Jim Treacher tweeted.