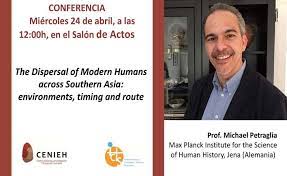 Michael Petraglia is a Professor of Human Evolution and Palaeolithic Archaeology.  He has taught at Cambridge and Oxford. Dr. Petraglia is a regular on the lecture circuit for paleo-anthropology conferences.  He is affiliated wih the distringuished Max Planck Institute of Leipzig, Germany, and is generally regarded in the top ranks of the paleo-anthropological community.

From his Smithsonian bio:

Petraglia has conducted large-scale, interdisciplinary archaeological research in the Indian subcontinent and the Arabian peninsula. His research has included study of the Toba volcanic super-eruption of 75,000 years ago and its effects on ecosystems and human populations.

Researchers said on Saturday they had discovered a frescoed thermopolium or fast-food counter in an exceptional state of preservation in Pompeii.

The ornate snack bar, decorated with polychrome patterns and frozen by volcanic ash, was partially exhumed last year but archaeologists extended work on the site to reveal it in its full glory.

Pompeii was buried in ash and pumice when the nearby Mount Vesuvius erupted in AD79, killing between 2,000 and 15,000 people. Archaeologists continue to make discoveries there. 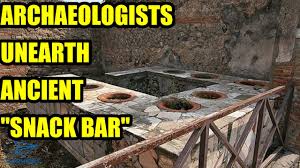 The thermopolium in question is located in an area known as Regio V, and like the myriad other archaeological finds to emerge from Pompeii, it has been remarkably well preserved after a catastrophic volcanic eruption in 79 A.D. blanketed the city with ash and debris. The snack bar was partially excavated in 2019, leading to the discovery of a counter decorated with a fresco of a Nereid, or sea nymph, riding a seahorse, along with what appears to be a depiction of the restaurant itself…

archaeologists unearthed “exquisite scenes of still life” showing animals—like mallard ducks and a rooster—that were probably butchered and sold at the snack bar, according to a statement by the Archaeological Park of Pompeii… Experts are certain that one dolium discovered at the site held an alcoholic beverage…

At the time of the announcement of the discovery major media like The Guardian, Forbes, others, were careful to avoid a sensitive topic surrounding the find.  The Smithsonian gives a hint but avoids specifics:

one of the counter’s frescoes, which happens to be inscribed with a rather rude slur.

Alternative media gave a detailed explanation.  Basically, a patron to the thermopolium did not like the owner.  The bar’s owner was named Niccius.  According to alt-media Niccius was very likely a freed slave, which meant he had lower status in Pompeii society.

The patron scrawled graffiti on the bar accusing Niccius of having sex with underage boys: “NICIA CINAEDE CACATOR.

From the UK Star,

They quote archaeologists explaining that it refers to the owner of the Roman snack bar Thermopolium of Regio V as being “an inverted s****er”. [shitter]

They noted it as a homosexual connotation from its derivation from the ancient Greek term for catamite.

“Catamites”, or “cacators” as they were known in Latin, were pubescent boys kept for sexual pleasure by older men, referred to as “pederasts”. 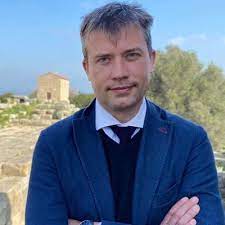 “The project to excavate and restore the Thermopolium… has led to extraordinary discoveries that help us to better understand the roughly eighty Thermopolia which are already known at Pompeii.” — Director General of the Archaeological Park of Pompeii, Gabriel Zuchtriegel

And now as Dr. Petraglia notes, rather ironically give current woke culture, the outdoor bar with the homophobic slur has been awarded Top Ten Archaeological find for 2021.

In 2021, archaeologists learned more about a famous bog body known as the Tollund Man, daily life in Pompeii before Mount Vesuvius’s fateful eruption, some of the oldest human handprints on Earth, and much more…

archaeologists in Pompeii announced the discovery of a well-preserved thermopolium, or food-and-drink stand. Thermopolia sold food doled out of amphorae that was to be eaten on the go. The remains of food items like duck, swine, goat, fish, land snail, and beans were found on the site…

No mention in Gizmodo of the graffiti.

In August of this year, the Pompeii Tourist Bureau announced the Thermopolium would be open to the public.

On the 12th August, the Thermopolium of Regio V, the ancient snack bar of Pompeii that was unearthed during recent excavations in an area of the ancient city which had never been investigated before, opens to the public, with special visits to the work sites of the House of Orion and the House with the Garden.

Thermopolia, where, as the Greek origin of its name would suggest, hot food and drinks were served, and stored in large dolia(jars) embedded in the masonry counter, were a common sight in the Roman world, where it was customary for the middle and lower classes to consume the prandium (meal) outside the house.

See a short YouTube video from euronews on the Thermopolium find,en français, and another short video, in English, from Flash News.