Pygmies dwindling down to 200,000 across Africa 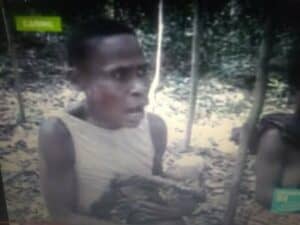 One of the world’s last remaining truly indigenous Hunter Gatherer populations is on the verge of extinction.  The Pygmies of central and western Africa are losing their last remaining habitats.  Bantu tribesman are forcing them deeper and deeper into the forest. They are seizing their ancestral lands to convert to farming.

In certain Pygmy areas, particularly in the central regions, they do not have the same rights as other African citizens. Local governmental authorities pressure them into camps outside Bantu villages.  In some cases they are enslaved and even ethnically cleansed.

Meanwhile, Pygmies are intermarrying with the Bantu, often times forced marriages depleting their gene pool.  Pygmies prior to the last decade, completely avoided the Bantu.

From geneticist Luca Cavalli-Sforza, 1986 via Genetic and Demographic Implications of the Bantu expansion, Molecular Biology and Evolution, 2009:

From the Smithsonian Magazine, by Paul Rafaelle, 2008, 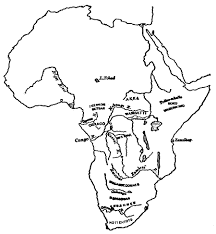 With about 250,000 of them remaining, Pygmies are the largest group of hunter-gatherers left on earth. But they are under serious threat…

Three scowling Bantus brandishing machetes stride into the clearing. I fear that they’re bandits, common in this lawless place… news of strangers travels fast among the Bantu here. Mesumbe points to one of them, a stocky man with an angry look, and in a low voice tells me he is Joseph Bikono, chief of the Bantu village near where the government has forced the Pygmies to live by the roadside.

[Bikono] “You Pygmies belong to me, you know that, and you must always do what I say, not what you want. I own you. Don’t ever forget it.”

As Rafaelle further notes the Pygmies face ethnic discrimination from the Bantus.

On my first trip to Mossapola, I had asked Bienvenu if he’d marry a Pygmy woman. “Never,” he growled. “I’m not so stupid. They are bambinga, not truly humans, they have no civilization.”

Congo Pygmies move deeper into the forest to escape extinction

In most regions of Central Africa, pygmies no longer have free access to their traditional lands and are unable to carry out traditional activities. Pygmies share the rituals and secrets of the forest to their children from the day they are born. The Aka-Mbenzel community worries they won’t be able to pass down their knowledge to the next generations.

The village of Longa is located deep within the rainforest of the Likouala Department. Here, community life continues quietly, away from ethnic discrimination… Pygmies are often looked down upon in Congolese society. They are seen as backward by the Bantu ethnic group, which historically kept them as slaves.

Pygmies are entirely dependent on the forest of the Congo Basin forest for their livelihood. It’s the second-largest rainforest on the planet, soaking up 1.2 billion tonnes of CO2 each year — making it crucial for regulation of the global climate. The rainforest is endangered by logging and clearing for large-scale agriculture.

According to The Economist, Africa’s population will “nearly double by the year 2050.” estimated to be 2.5 billion people.  The growth rate is 2.7%.  Indigenous populations such as the Pygmy tribes – Mbuti, Baka, Twa, the Aka and Byaka, along with the KhoeSan of southwest Africa, will face even greater demographic pressure.

Further compounding the problem, implementation of policies from international bodies such as the United Nations to fight what is perceived by some as global climate change, is forcing the indigenous African populations off of their lands. 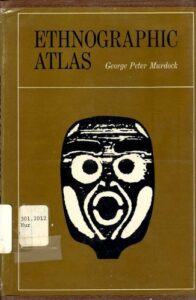 Protected areas have largely been able to reduce deforestation. But their creation can also mean the eviction of communities which have lived in forests for generations, barring them from resources and sacred sites. These injustices have often been made possible by human rights abuses, including violent intimidation and even killings by state forces and other groups.

Pygmies across the various tribes carry unique and quite ancient genetic markers.  According to International DNA blog Pygmies carry, “Pre-Bantu haplogroups A and B2b.”  Additionally, “This means the Bakouya and Baka Pygmies are the top candidates as being carriers of the Y-DNA A and A2 older African paternal haplogroups/lineages.”

More from Molecular Biology and Evolution:

Haplogroup B2b was present in all the Pygmy populations of the sample set, showing very high frequencies in both Baka populations (over 60%), and lower frequencies in the Bakola population (around 27%). However, this haplogroup was virtually absent among agriculturalist [Bantu] populations, only being observed in four individuals (0.4%)

Yale Professor George P. Murdock was one of the leading Anthropologists of the middle 20th Century.  In 1959 he authored a pioneering study,  “Africa: Its Peoples and Their Culture History.”

“Based on Murdock’s research, the southern Pygmies that no longer survived in original form that lived near the Drakensberg range (pre-Bantoid groups) were partly like a separate Hominid species but that the northern Pygmies appear to be a subspecies of AMH [Anatomically Modern Humans]. The DNA of the southern Pygmies before being absorbed by other groups was very unique. Their autosomal DNA is found in some tribes in Namibia, Knysna Xhosa and Zulu. It looks like northern agriculturalist Nguni tribe intermarried with a southern ghost Pygmy population.” 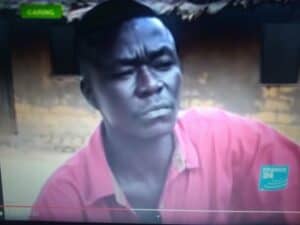 “We pay them with pieces of clothes.  Clothes and food.  Anything that we find, we give them as payments.”

Narrator: “Do you sometimes whip them?”

As Narrator Hannah Hoexetter of France24 News reported back in 2009,

Reporter in the Congo: “They’re the oldest people in the world.” (See note below)

Pygmies were once nomads.  But now most of them have settled near Bantu villages.  The Bantu remain the only landowners… [Forced labor and malnutrition] According to Unicef one of three Pygmy children dies before the age of 5.

Today the forests are no longer a safe haven for the Pygmies as they come into contact with other tribes.”

Note – Pygmies actually share the title of the oldest people in the world with the KhoeSan further south.  This was unclear in 2009 when the France24 news article first appeared. We now know through genetic research, KhoeSan diverged 170,000 years ago; Pygmies 130,000.