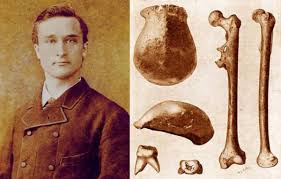 Chinese media just announced the discovery of a new Hominid skull dated 32kya.  The archaeologists indicate it is an archaic Homo sapien.  But could it be a hybrid like “Denny” the young girl Neanderthal-Denisovan dated from the Tibetan cave in 2017 (Nature, 2018), or perhaps another possibility, a late surviving Homo erectus?

Homo erectus, as described by the UK Natural History Museum, “is a huge success story. Fossil evidence for H. erectus stretches over more than 1.5 million years, making it by far the longest surviving of all our human relatives.”

Eugene DuBois, the indefatigable, eccentric Dutchman made the first fossil find of Homo erectus in Java, Indonesia in 1890, a skull cap, tooth and femur bone.

Background from the Smithsonian:

Early fossil discoveries from Java (beginning in the 1890s) and China (‘Peking Man’, beginning in the 1920s) comprise the classic examples of this species. Generally considered to have been the first species to have expanded beyond Africa, Homo erectus is considered a highly variable species, spread over two continents…

Peking Man was discovered at Zhoukoudian cave site in 1927 southwest of Beijing.  The fossils were lost during the Japanese invasion of the Chinese mainland.  But exact replicas were made and transported out of China. 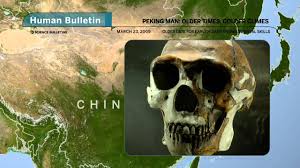 Ever since the Zhoukoudian discoveries, Chinese paleontologists and anthropologists have been pushing back on Recent Out of Africa favored by Western scientists. They have adamantly favored a Multiregional model, arguing for direct lineage from Homo erectus to modern Han Chinese.

As Jane Qiu explained in Nature, July 13, 2016, via Facts and Details, Hominins in China:

“Most Chinese palaeontologists — and a few ardent supporters from the West — think that the transitional fossils are evidence that Peking Man was an ancestor of modern Asian people. In this model, known as multiregionalism or continuity with hybridization, hominins descended from H. erectus in Asia interbred with incoming groups from Africa and other parts of Eurasia, and their progeny gave rise to the ancestors of modern east Asians, says Wu.

“Support for this idea also comes from artefacts in China. In Europe and Africa, stone tools changed markedly over time, but hominins in China used the same type of simple stone instruments from about 1.7 million years ago to 10,000 years ago. According to Gao Xing, an archaeologist at the IVPP, this suggests that local hominins evolved continuously, with little influence from outside populations.

[With] the study of human origins, African origin is the current general consensus, yet a competing “multiregional view” is also held by many scientists.

Now a major find has been announced in the Henan Province of central north China.  Henan Province is regarded as the cradle of Chinese civilization.  The Province is approximately 300 miles south, southwest of Beijing.   The cave site where the fossil finds were made is in the Guanyinsi township.

On September 27,  Xinhua.net reported that:

A human skull fossil dating back 32,000 years was found in a cave site in central China’s Henan Province…

A local archaeologist involved in the find gives details:

“There are two caves in the site, with one standing 9 meters in length, 3 meters in width and 3.9 meters in height, covering an area of 30 square meters,” said Zhao Qingpo.

Uranium series dating methods were employed.  Amazingly, the one skull was found to be 32,000 years old.  Moreover, archaeologists found tens of thousands of bone fragments from a variety of animals such as horses, goats, deer, bears, wolves, dated at ~40,000 years old.

“The new findings are of great significance for the study of the origin and development of modern humans in China,” said Liu Haiwang, president of the Henan Provincial Institute of Cultural Heritage and Archaeology.

[In China] “There are discoveries of a couple of skulls dated to roughly 100,000 years ago that seem to possess a mixture of classic Homo erectus and Homo sapiens traits.”  — Donald Johanson, Discoverer of Lucy, Australopithecus afarensis

Paleo-geneticist and University of California-San Diego graduate Dr. Shi Huang, often cited at this website, was the first to announce the find to a Western audience, Tweeting out: 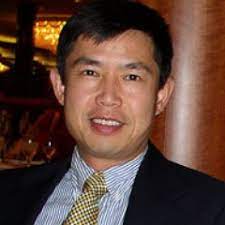 [A skull] from 32 kyr ago just found in Henan China. aDNA is expected soon.

Prominent paleo-anthropologists are divided as to exact dates for the demise of Homo erectus.  Some suggest, at least in Europe, Africa and western Asia, Heidelbergensis evolved from Homo erectus, and may have been ancestral to Homo sapiens 300,000 to 350,000 years ago.  Jebel Irhoud partial skull in Morocco ~315,000 years ago, along with Herto skulls in Ethiopa ~120,000 years ago, representing archaic Homo sapiens.

But evidence for Heidelbergensis in East Asia is more sketchy.

From the Natural History Museum,

Precisely when – and why – H. erectus disappeared is unclear, but it appears to have survived in parts of Indonesia until at least 250,000 years ago.

Disputed evidence of the very late survival of H. erectus on the Indonesian island of Java exists in the form of fossil braincases (the part of the skull that encloses the brain) and a few other fragments. Some methods have dated these to older than 200,000 years, others to less than 50,000 years.

The Smithsonian description of Homo erectus dates for the last of the species at 110,000 years before present.

Chris Stringer, of the London Museum for Natural History leans towards a later date for the survival of Homo erectus, at least on Java (YouTube lecture, Dec. 2019).  Stringer has speculated that Homo erectus may have lived up to 70,000 years ago.

Did Homo erectus survive in East Asian even later?  Does Henan man represent the last survivor of the species.  Or, another possible explanation, does Homo henan represent a transition of Homo erectus to Sapien-Asiaticus?

“China may contain the best evidence for supporting the Multiregional Model. There are discoveries of a couple of skulls dated to roughly 100,000 years ago that seem to possess a mixture of classic Homo erectus and Homo sapiens traits.”