The new Douglas Murray book is scheduled for release in late May.  Murray is a libertarian-conservative author, academic and philosopher based in the UK. Based on pre-orders alone, according to Juliet Hartly of the LBC, Murray’s book is number one on Amazon. 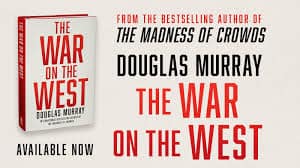 It might be regarded as a pretty inflammatory title, The War on the West.  What do you mean by war, and why do you use that title?

We’re going through a war with every foundation of the West, everything to do with the West, the results of the Western inheritance… the war on Western history, the war on Western peoples, on Western culture, Western religion and philosophy…   I should stress here what I’m describing here is Western anti-Westernism…  why we in the West have arrived at this strange place where we venerate everything else, so long as it’s not our own…  I do think it’s a fundamental assault.

It’s picked up a pace.  And it’s picked up a pace for some very obvious reasons.  After the colonial area, there was bound to be a backlash…  [Now] It’s all rather gauche, Orwell famously pointed this out.  It’s rather gauche to celebrate anything from your own society… whereas the veneration of other cultures is a sophistication…

“Whilst you’re talking about the rights of lesbian couples, or whatever, much of the rest of the world is hacking their neighbors to death”

The same day, Murray appeared on Triggernometry out of the UK with comedians Francis Foster and (Russian-born) Konstantin Kisin.

Highlights from the dialogue:

We need someone to come from the outside to say hang on a moment guys, most of the world isn’t like this.  Whilst you’re talking about the rights of lesbians couples, or whatever, much of the rest of the world is hacking their neighbors to death… sometimes you need an outsider to say that… look you’ve got yourselves really out of proportion.  I think there’s no other country in the world that’s more of the case than with America.

One of my favorite chapters in my book is the chapter on Gardening. Everything is racist.  Gardening is racist.  Lawns are racist.  To hell with these people, they’ve taken over every institution in our own country… 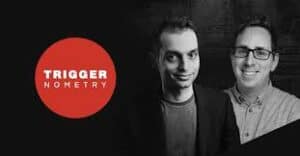 Let’s be fair, isn’t this just preying on white guilt?

Let me say something that I feel needs to be said.  I don’t feel any white guilt. I don’t feel any guilt.  Hereditary guilt… and nobody else should either.   You are not guilty because you are born white anymore than you are guilty because you are born black.  It is a totally neutral thing. It is the place that you start from. Nothing is built into it.  So, what has happened is that too few people in recent years have been willing to say, what I just said.  No.  It’s a straight forward fact.  There is no such thing as white guilt. We will not have you pretending that there is.

There’s no such thing as white rage.  And if you do thing there’s such a thing as white rage, than play it the other way.  Say you’re interested in black rage… they would never do it about other people, and it’s high time they stop doing it about white people.  It’s absolutely reprehensible and disgusting…

It’s people taking advantage… the race hustlers come along.  The Robin D’Angelos, the Ibram Kendi…  So, one of my self-appointed roles is to put an end to that racket.

Murray’s soon-to-be-released book is already receiving rave reviews.  From Hannah Gal at the Times of Israel,

The War On The West by Douglas Murray

Coherent, lucid and incisive, the bestselling author demonstrates how the anti-West narrative is poisoning every organisation, body, individual and idea in its path. Its ethos is the burning conviction that the privileged, elitist and white West is the problem, and its dismantling is the solution.

We see how social activism has become the new religion and how racism is the only lens by which all things are measured. Murray shows how major cultural institutions distanced themselves from their own past, how they volunteered to search their archives for traces of colonialism, slavery or racism, and how countless well meaning individuals were swept in the diversity, inclusion and equity tide.

“It’s about… revenge on white people”

From CRT and BLM, to the merciless attack on countless ‘dead white males’ – one by one Murray presents their ‘case’ before discussing their premise and dismantling their myth.

So, that today that is is permissible to say racist things about in society are white people.  The majority populations of countries like Britain, like America.  Everything in our history has been torn down… has been taken away from us.

And some advance praise for Murray’s book from even the leftside of the aisle:

“Douglas Murray, one of the most successful rightwing authors of our age.” Owen Jones, The Guardian.

UPDATE! Konstantin Kisin, co-host of Triggernometry Liked our Tweet announcing this article and promoting his show on Twitter.