Excerpt, “The Mismeasure of Man” 1982 by Stephen Jay Gould, via London Review of Books, A.W.F. Edwards: 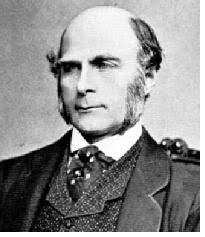 No man expressed his era’s fascination with numbers so well as Darwin’s celebrated cousin, Francis Galton (1822-1911). Independently wealthy, Galton had the rare freedom to devote his considerable energy and intelligence to his favourite subject of measurement. Galton, a pioneer of modern statistics, believed that, with sufficient labour and ingenuity, anything might be measured, and that measurement is the primary criterion of a scientific study. He even proposed and began to carry out a statistical inquiry into the efficacy of prayer! Galton coined the term ‘eugenics’ in 1883 and advocated the regulation of marriage and family size according to hereditary endowment of parents.

The 19th century geneticist Francis Galton has been in the news recently.

Angela Saini, a critic of this website, wrote in October of last year in the far left UK Guardian,

In the twisted story of eugenics, the bad guy is all of us

over the last year, University College London has been in the midst of a historical inquiry into its role as the institutional birthplace of eugenics – the debunked “science” that claimed that by selectively breeding humans we could improve racial quality.

Galton does resemble a monster. He was a brilliant statistician but also a racist… He was obsessed with human difference…

With the COVID-19 pandemic raging, Galton has received even greater attention, from the media, Twitter, YouTube, and other platforms.

Pandemics and the survival of the fittest

Yet a century ago, medical and scientific authorities, egged on by religious leaders, supported a violent form of social Darwinism.

Soon after Charles Darwin published his evolutionary theory based on the “survival of the fittest,” anthropologists such as Francis Galton seized upon its social implications: Use the tools of science to improve the human species. “What Nature does blindly, slowly, ruthlessly, man may do providently, quickly and kindly,” Galton told a London society in 1909. Galton coined the term eugenics — “good birth” — to promote his social vision. “It must be introduced into the national conscience,” he said, “like a new religion.”

Dr. Noah Carl was a researcher at Oxford University. Two years ago he was canned for daring to attend a conference where race and IQ differences was discussed.  Communists at the World Socialist Web Site gave an amusing account in October of last year, 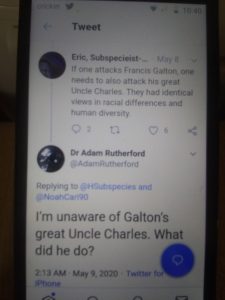 In December 2018, sociologist Noah Carl was appointed to a prestigious research fellowship at St. Edmund’s College, Cambridge University. Carl had previously collaborated with white supremacists (sic) and eugenicists, and authored and reviewed papers alleging links between IQ, race and criminality.

On May 8, Noah, who now writes for the pro-race realist site Quillette, Tweeted the following:

“The geneticist A.W.F. Edwards has written an article for Oxford Magazine, arguing against the “denaming” of Francis Galton at UCL.”

“If one attacks Francis Galton, one needs to also attack his great Uncle Charles. They had identical views in racial differences and human diversity.”

It should be noted, left-anthropologists and geneticists are giddy about attacking Galton.  Yet, oddly, they seem to be reluctant to go after Charles Darwin himself.

Dr. Adam Rutherford, a close friend and ally of Angela Saini, is a far left British geneticist, author, YouTube presenter and host of the BBC 4 show “Inside Science.” Rutherford has over 105,000 followers on Twitter. See his video “How to argue with a Racist” on YouTube.

Responding to Noah Carl, he was quick to make a smart-ass remark directed at this site:

“I’m unaware of Galton’s great Uncle Charles. What did he do?”

Of course, Galton was Darwin’s cousin, not uncle.  A mistake on our part. But Rutherford gave no comment on the issue itself; should Galton and Darwin be stripped of their academic titles and other honorary designations.