As noted here at Subspecieist.com, geneticists and anthropologists have known for years that some Africans have tiny traces of Neanderthal DNA.  Now, a major new study, and a soon-to-be-released study are confirming this Neanderthal introgression.

A new study by Princeton University evolutionary biologist Joshua Akey has found that on average African subpopulations have 17 megabases (Mb) worth of their genome that can be traced to Neanderthals.  On average, East Asians have 55 Mbs and Europeans have 51.

The results jibe with as-yet-unpublished work by Sarah Tishkoff, an evolutionary geneticist at the University of Pennsylvania. She told Science she has also found higher-than-expected levels of apparent Neanderthal DNA in Africans.

The best fit model for where Africans got all this Neanderthal DNA suggests about half of it came when Europeans—who had Neanderthal DNA from previous matings—migrated back to Africa in the past 20,000 years…

And this very intriguing note of special interest to readers of this website.  (See our most recent article on “Cameroon Burial Site: Rare Haplo-type Afros may be descended from another Hominid Species.” Jan. 28)

The model suggests the rest of the DNA shared by Africans and the Altai Neanderthal might not be Neanderthal at all: Instead, it may be DNA from early modern humans that was simply retained in both Africans and Eurasians—and was picked up by Neanderthals, perhaps when moderns made a failed migration from Africa to the Middle East more than 100,000 years ago. 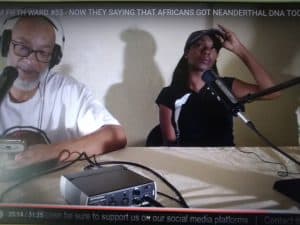 Dr. Reich said the new findings do make a strong case that modern humans departed Africa much earlier than thought.

“I was on the fence about that, but this paper makes me think it’s right,” he said…

In recent years, Dr. Reich and other researchers have found evidence that ancient people from the Near East moved back into Africa in the past few thousand years and spread their DNA to many African populations.

It’s the “migrating back to Africa” and interbreeding with Afro-subpopulations that have some Africans and even American blacks upset.  Just another example of white colonialism?

From the Live From Fifth Ward #55 broadcast, Jan. 31, “Now they saying that Africans have Neanderthal DNA too!!!”:

“These are white supremacists in quote-un-quote, archaeology DNA genetics field have reported to CNN, that they discovered that all modern humans have Neanderthal DNA.  Cause, ya see, they fucked and reported that all Caucasians, all non-Africans, have 7.  First they say 1 to 2% Neanderthal DNA.  Then it came out later that it was 7 to 11% Neanderthal DNA. So, that’s not a good look for them, cause they keep their finger on the pulse of the community.

They think people like us are insignificant. They watching and listening. They know we running with that, cause we be saying we the pure humans. So, they have to come out with something to counter that.

So now they be saying yeah, all people migrated out of Africa, but it be multiple migrations… a group of Africans left, mated with Neanderthals in Europe and came back to Africa… they trying to muddle the shit to inject themselves into places of history where they don’t exist… Use their fake-ass science… They were giving us too much…  So, to be a human is to have Neanderthal DNA…  And the authors of this article, they got Asian names, like Lu Chin… to further support white supremacists… We all know that Africans don’t have no Neanderthal DNA…”