“Than you would have to say that Africans were not the first humans, Neanderthals were” — Cynthia G. 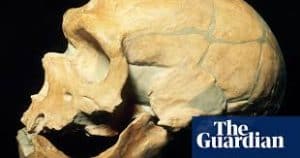 Scores of blaring headlines these last two couple in mainstream media, announced that Africans too have Neanderthal DNA.  Everything from Scientific American, Cell and NatGeo, to more generalized publications like the New York Times, The Guardian, Chicago Tribune, LA Times and the UK Daily Mail premiered the findings of geneticist Joshua Akey’s research team.

Fox News was notably more reserved at least in their headline, Feb. 1,

Scientists at Princeton University have made a stunning Neanderthal ancestry discovery that sheds new light on human history.

Neanderthal DNA has typically been associated with modern humans outside of Africa. However, by developing a new method for finding Neanderthal DNA in the human genome, the Princeton researchers have, for the first time, searched for Neanderthal ancestry in African populations, as well as those outside the African continent.

And this from CNN,

We all likely have a bit of Neanderthal in our DNA — including Africans who had been thought to have no genetic link to our extinct human relative, a new study finds.

researchers from Princeton University now believe, based on a new computational method, that Africans do in fact have Neanderthal DNA and that very early human history was more complex than many might think.

The exact percentage of Neanderthal DNA Akey and his team discovered in upper continental Africans was < .3%.  That in comparison to 1 to 2% in Eurasians.

Roughly two percent of the genomes of Europeans and Asians are Neanderthal. Asians also carry additional Denisovan DNA, up to 6 percent in Melanesians…

The results suggest that modern Africans carry an average of 17 million Neanderthal base pairs, which is about a third of the amount the team found in Europeans and Asians.

And as NatGeo confirms, those Africans tested by Akey in the sample pool, were “mostly northern Africans.” Less Subsaharan Afros were included. Additionally, media sources have been sketchy on any inclusion in the pool of KhoiSan and Mbuti.

Since the release of the news, a backlash has emerged and from an unanticipated direction.  As we first reported here at Subspecieist.com, Feb. 3,

Now, an evern better-known black activist, Cynthia G, with over 30,000 subscribers on her YouTube channel has produced a lengthy video attacking Akey and his team.

If this is what they’re sticking too, they are basically re-framing and restructuring every single thing they have said about the existence of humans… let’s look at the ridiculousness.  [Cynthia reads the CNN article]

Now the reason why they are saying this, that it’s more complex, than it debunks everything. Because then you would have to say that Africans weren’t the first humans, Neanderthals were. [Emphasis added]

That would mean a Neanderthal and something else is what created the African.

Let me tell you what this is saying.  Since y’all been running around and saying that y’all are the only pure humans, we’re going to do some research and say y’all have Neanderthal DNA too… and we know that you’re just going to believe it, because we’re white and we told you…

As of this writing, there are 795 comments in Cynthia G.’s comment section.