Admixture has played a prominent role in shaping patterns of human genomic variation, including gene flow with now-extinct hominins like Neanderthals and Denisovans…

Though the paper examined other key topics such as back migration from Eurasia into Africa, it was the Neanderthal DNA in modern Africans that the media focused in on.

“Our results show this history was much more interesting and there were many waves of dispersal out of Africa, some of which led to admixture between modern humans and Neanderthals that we see in the genomes of all living individuals today,” said Joshua Akey, an evolutionary biologist at Princeton University and senior author of the research. [Emphasis added].

The study suggests living Europeans and Asians carry about 1% Neanderthal DNA, compared with on average 0.3% for those of African ancestry.

From The Guardian, Kenan Malik, Feb. 16,

sub-Saharan Africans, it was believed, possessed no Neanderthal DNA.

A new study shows this is not true. Sub-Saharan populations do carry Neanderthal DNA.

Until recently, some researchers assumed people of African descent didn’t have Neanderthal ancestry because their predecessors didn’t leave Africa to meet the Neanderthals in Europe and Asia. But in January 2020, a paper in Cell upended that narrative by reporting that modern populations across Africa also carry a significant amount of Neanderthal DNA. [Emphasis added]

And note this unambiguously titled article from Katie Hunt at CNN,

We all likely have a bit of Neanderthal in our DNA — including Africans who had been thought to have no genetic link to our extinct human relative, a new study finds…

Confirming Neanderthal DNA in Africans, of course, runs counter to a major premise of race realists, biodiversity (HBD) advocates and others who recognize human variation and specialization.   Left-leaning Mainstream media, gleefully believed they had a gotcha moment embarrassing the right.

We here at Subspecieist.com were suspicious.  We wrote on Feb. 3:

as NatGeo confirms, those Africans tested by Akey in the sample pool, were “mostly northern Africans.” Less Subsaharan Afros were included. Additionally, media sources have been sketchy on any inclusion in the pool of KhoiSan and Mbuti. [Emphasis added]

This was confirmed in The Guardian piece referenced above, from Jan. 30.  At the very bottom of the 16 paragraph piece, this acknowledgement, which didn’t quite match the sensationalist headline:

It is not known whether all African populations, some of whose roots stretch into the deep past, share this Neanderthal heritage. KhoeSan (bushmen) and Mbuti (central African pygmy) populations, for instance, appear to have split off from other groups more than 100,000 years ago. [Emphasis added]

And now Subspecieist.com has located a Tweet from one of the co-authors where he concedes to another paleo-anthropologist W. Malcolm Byrnes, that the paper concludes only some Africans have Neanderthal.  Byrnes queries Aaron B. Wolf, if he knows of any African populations “where back-flow from a European ancestor did not occur.”

[Aaron B. Wolf] We expect there was less back-flow in more isolated southern African populations, (ie g. San), but those individuals were not available in the data we analyzed. [Emphasis added] 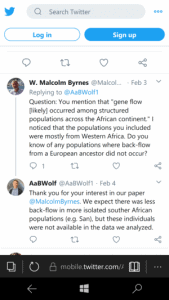 Editor’s note – Thank you to Rawhide Wrath of Gab for assisting with the production of this article. And thank you to Bill DeWitt and Martha Christina, also of Gab, for their suggestions.