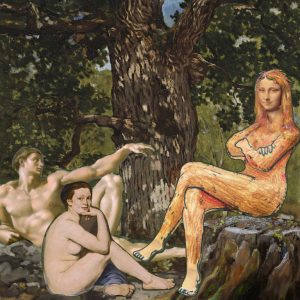 Religion meets evolution in Andrew Corbet Burcher’s new comedy Going Ape!… The tale of an extremely unusual meeting runs at the Southwark venue from 7 to 18 April 2020.

The story revolves around Adam and Eve, but with a twist, a second female non-Homo sapien enters the scene.

From the description, via SoutwarkNews.co.uk Oct. 2020:

Adam and Eve, who lived for 900 years after their expulsion from the Garden of Eden, are both waiting for the arrival of their eldest son Cain, dropping in for a short visit to break the monotony of his homeless wandering existence… A life sentence imposed on him by God for killing his brother Abel… But Cain brings with him a woman he’s met in Africa. She is Australopithecus Afarensis, the earliest known woman.

Australopithecus Afarensis is of course, the famous Lucy, discovered in the Afar region of Ethiopia in 1973 by Paleontologist David Johansen.  A study released in January of this year by Arun Durvusala and Sriram Sankararaman, genetics at the UCLA lab, suggested as much as 19% of modern African DNA is archaic.  Though, geneticists have not specifically identified any of the various Australopithecines as the archaic admixture of modern Africans.  Some have speculated Homo naledi or Homo ergaster.

Researchers have teased out evidence suggesting the ancestors of modern-day sub-Saharan Africans interbred with an archaic human group.

[Modern Africans] up to 19-percent genomic contribution from unidentified archaic human, who may have survived until recently… 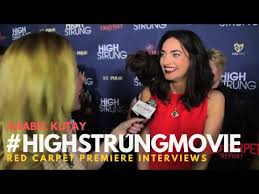 In the beginning, according to the scientists, however, man evolved from apes in the form of Australopithicenes…

Cain brings with him his new girlfriend. She is none other than Australopithicus Afarensis, the earliest example of a human walking semi-upright discovered some years ago at Hadar, in the Afar region of Ethiopia Africa. The anthropologists who found her decided to call her Lucy.

As Lucy gets to know Adam and Eve it becomes clear that they have their own original personalities and are in desperate need of something creative to do. Thus the first ever signs of primitive talent emerge…

Back in March MyTheatreMates.co.uk noted:

Casting for the new production is yet to be announced. This may be due to the fact that finding actors with a playing age of… or 3.5 million years old for Lucy, is proving tricky.

But Anabel Kutay (photo) will play the role for a return engagement.