Pan-Australopithecus now a contender for the missing link to genus Homo?

For decades the East Africa model for origins of the genus Homo has been predominant.  Lucy, Australopithecus afarensis discovered by Donald Johanson, has garnered the bulk of recognition.

Johanson in his smash bestseller “Lucy; The beginnings of Humankind” published in 1981, wrote (page 285): 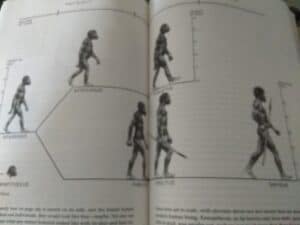 That diagram makes our position clear: that the Laetoli-Hadar specimens represent a common ancestor to the later australopithecines and to [Genus] Homo; that divergence between the latter two types probably began around three million, and that africanus represents an intermediate stage on the way to robustus.  We do not believe it was ancestral to humans.  [Emphasis added]

We do believe that the emergence of human beings began sometime after three million years ago. By two million it had been accomplished. By then creatures recognizable as Homo walked on earth.  So did their cousins, the robust australopithecines.  For about a million years they appear to have walked side by side.  But one million there were no australopithecines left.  They had all become extinct.

Now new evidence has emerged indicating that the genus Homo may have originated from a hybrid Australopithecus, not necessarily from Australopithecus afarensis as previously believed.  New dating of Australopithecus africanus fossils, from the famed Sterkfontein site in South Africa has thrown the entire timeline for middle pleistocene human origins up in the air. 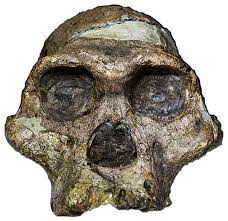 Sterkfontein, 40 miles northeast of Johannesburg, is where numerous Hominin fossils have been discovered, including the two most famous, Mrs. Ples and Little Feet.

Mrs. Ples, a near complete cranium of an Australopithecus africanus, was discovered by Robert Broom in 1934.  This was 8 years after the first A-africanus was discovered by Broom’s close friend and colleague, Dr. Raymond Dart in 1974, the famous Taung Child.

Little Feet is an Australopithecus described as “the most complete ancient hominin in the fossil record.”  The Hominin skeleton has been mired in controversy, and it’s taxonomic classification is still up in the air.  Is it an A-africanus, a hybrid or an entirely different species?

Part of the reason for the original confusion for the dating of the Sterkfontein fossiles was due to the unorthodox fossil mining methods of Dr. Robert Broom.  Broom, a firey Scotsman, was often described as stubborn maverick by his colleagues, critics and the media.  He would extract the fossils using dynamite.

Dynamiting cut the workload and time frame for finding fossils significantly, but also resulted in damage to the bones. Of course, it also made it difficult to identify the precise stratigraphy of the finds. 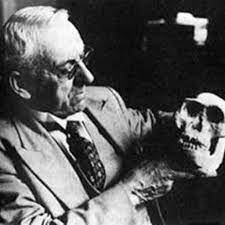 Stratigraphic records were not kept during excavations by P. V. Tobias and A. R. Hughes from 1976, and the presence of the younger member above the Type Site where fossils were blasted out and studied by R. Broom in the 1930s…

From the Sydney Morning Herald, June 24,

South Africa may be the original home of humankind after all

The study of hominin remains from the Australopithecus genus found at the Sterkfontein Caves north of Johannesburg – including the famed Mrs Ples fossil – puts their ages at between 3.4 million and 3.6 million years, Johannesburg’s University of the Witwatersrand said in statement. That would make them older than the Lucy fossil found in Ethiopia in 1974, which is 3.2 million years old.

Raymond Dart, Dept. of Anthropology head at the Universty of Witwatersrand, discovered the first specimen in 1924, and named the species Australopithecus afarensis (southern ape man).  A female student had notified him that quarrymen were finding interesting fossils at the Sterkfontein site northeast of Johannesburg.  He asked her to alert the quarry foremen that he’d like to have some of the fossils.  On the day of his best friend’s wedding, a box was delivered to Prof. Dart at his home from the quarry.  Among the specimens was the famous Taung child.

But the fossils were mis-dated.  The stratigraphy of the region made it difficult to date the fossils.  And Broom added to the confusion, by his unconventional methods using blast-mining with dynamite.

“South Africa was largely ignored because it was so difficult to date the fossils. They were largely dismissed as not being relevant to the story of human evolution,” Ronald Clarke, a professor at the University of Witwatersrand and an author of the paper, said in an interview.

“these species had plenty of time to travel, to breed with each other … so we can largely imagine a common evolution across Africa,” — Laurent Bruxelles

The authors explain the method in a paper published at the distinguished PNAS journal, June 27, 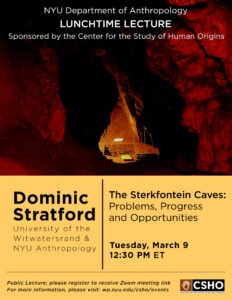 Our dates demonstrate the limitations of the widely accepted concept that Australopithecus africanus, which is well represented at Sterkfontein, descended from A. afarensis. The contemporaneity of the two species now suggests that a more complex family tree prevailed early in the human evolutionary process. The dates highlight the limitations of faunal age estimates previously relied upon for the South African sites. They further demonstrate the importance of detailed stratigraphic analysis in assessments of accurate dating of the karst cave sites in South Africa, which are stratigraphically highly complex…

The authors suggest, that instead of a linear model of A-afarensis (Lucy) leading to later Australopithecines and eventually to genus Homo, indeed, A-africanus may have been the progenitor, or at least a hybridized Africanus-Afarensis mix.

The South African Australopithecus had previously been considered “too young” to be the ancestor of the Homo genus, Stratford said. That meant that Lucy’s home of east Africa was thought to be the more likely place where the Homo genus evolved.

But the new research shows that the South African Australopithecus had almost a million years to evolve into our Homo ancestor.

Or they could have worked on it together.

“Over a timeframe of millions of years, at only 4,000km (2,500 miles) away, these species had plenty of time to travel, to breed with each other … so we can largely imagine a common evolution across Africa,” Bruxelles said.