Dr. Chris Kavanagh has quite an impressive resume.  He is currently working and living in Japan.  But his background includes… from his Bio at Oxford University: 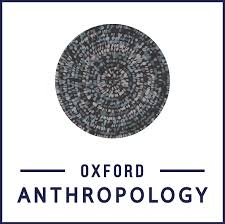 a postdoctoral researcher at the Institute of Cognitive & Evolutionary Anthropology. He earned a BA in Study of Religions (2006) and an MA in Social Anthropology (2007) at the School of Oriental Studies (SOAS) in London, before moving to Oxford were he completed an MSc in Evolutionary & Cognitive Anthropology (2011). He was awarded his DPhil in Anthropology (2016) based on his thesis ‘Individual Pains & Social Gains: The Personal & Social Consequences of Collective Dysphoric Rituals’. During his DPhil, he worked on the ESRC ‘Ritual, Community & Conflict’ project (2011-2017) and he now works as a postdoctoral researcher on the ERC funded ‘Ritual Modes’ project led by Prof. Harvey Whitehouse.

Dr. Kavanagh is especially critical of conservatives and libertarians. He has a particular interest in the Alt or Dissident Right.  In 2017 he penned a piece attacking both Milo and Paul Joseph Watson on Medium.com.

Unfortunately, Milo will be back

Although Milo undoubtedly did some damage to his reputation a quick look around the alt-right twittersphere finds that far from abandoning Milo, the predictable figures are actively voicing their support. The typical attack lines of invoking mainstream media conspiracy/censorship and false equivalence arguments are already out in force; with poor taste jokes made by liberal comedians being highlighted to suggest that all of the criticism is just partisan hypocrisy.

The idea that the current controversy has finished Milo is just another demonstration that many mainstream commentators do not understand the alt-right and its supporters… My recommendation about how best to respond to Milo thus still stands: just accept that he is now a polemical right wing voice and react accordingly. Again, if you think Ann Coulter isn’t worthy of much attention or thought space then neither is Milo.

On January 22, Kavanagh had an exchange on a social media platform with Subspecieist.com  In response to the editor saying “Race is an increasingly obsolete term in Human anthropology.  Subspecies is far more accurate and descriptive,” Kavanagh conceded:

The full text of his remarks: 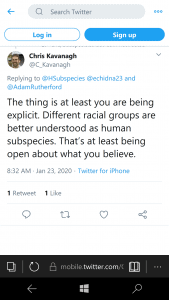 Editor’s note – Subspecieist.com is thankful for Dr. Kavanagh’s remarks in support of the ideology of this website. We will be including it in the Quotes on Race Realism section, where it will be a permanent addition for our collection.