Western Australia Premier Mark McGowan is all over the international news for Covid restrictions he is enacting.  He has instituted draconian travel restrictions in all but 1 Australia province.  Only The Northern Territories is designated as “Extreme Risk Level.”

New South Wales, Hamilton and the Capitol Region are already under severe restrictions.

From the UK Daily Mail, 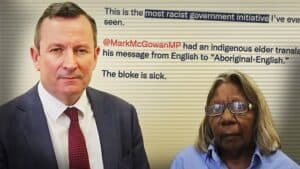 Western Australia has banned residents of all other states and territories from visiting, even to visit dying family members.

Mark McGowan raised the Northern Territory to ‘extreme risk’, the highest level of Covid warning that bans all arrivals even for compassionate reasons…

The new rules will come into effect by 12.01am on Thursday, with only government officials, defence force personnel and diplomats allowed to travel into the state.

Travellers with an exemption must be vaccinated and complete 14 days of quarantine in a state-run facility at their own expense.

But Premiere Mark McGowan is trending on Twitter and burning up other social media platforms for another reason.

As part of his crack-down campaign, McGowan produced a public service announcement video to inform Aboriginal citizens, mainly in Western Australia, to take note of the new measures.  In the video, his Aboriginal staffer translates simple instructions, advise on where to get vaxxed, and safety measures to avoid infection by the virus, into pidgin English.  Start of the video:

McGowan: This is an important message to keep Aboriginal people safe.

Translator: A [unintelligible] message.  A proper important one.  Keep ’em everybody safe one.

But as right-wing Australian activist Avi Yemini points out, the video is cringe worthy at best, and may be downright racist.

Wow.  Not only is the Premiere talking to the local indigenous population in the most condescending tone, like they’re little children and they should listen to their big smart white daddy.  As if that’s not bad enough, he had to hire a translator from his fluent white man English, not into their native tongue, but rather into black fella English.

That is the definition of white supremacy.  I’ll tell you what’s good for you, and I’ll get someone to dumb it down into your own unsophisticated English.

Have some respect for our indigenous population Premiere.  Talk to them like in English as they obviously understand, because you’re translating it into English.

Tim Poole, over 500,000 followers on Twitter, also Tweeted out the video.  A number of commenters in Australia and all over the English speaking world blasted the Premiere on Twitter:

They’re the same language and it makes the aboriginals look like idiots. — Capricorn Libertarian

The premier of my state @MarkMcGowanMP is the laughing stock of the world. And so he should be. Racist imbecile. — JP Winner

This would be akin to Biden hiring Lil’ Wayne to speak “ghetto” or “urban” to his audience. Implying they don’t understand normal spoken English. — Roy-Al-Lyons

The UK-based Alt-right site ussaanews.com recognized the hypocrisy of McGowan and other elites on race, 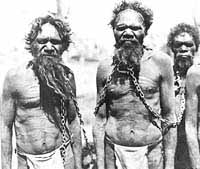 He is exploiting an aborigine in order to push a dangerous experimental drug on a segment of the population which has strongly and rightly resisted taking the poison.  [The PSA video] translates English into English. In one fell swoop, Mark McGowan’s video has redpilled the entire pureblood community on the fact that aborigines are at a lower stage of human development and probably don’t fit in very well with White Man Civilisation.

To put it a little more politely, everybody is different. Different ethnies or races are different to each other, we have different characteristics, cultures, strengths and weaknesses. The world is happiest when each nation lives in its own land, separate from other nations. It reduces the likelihood of conflict and preserves human diversity.

This is the complete opposite of what every government and corporate entity in the Western world tells us. We are told that “racism” is the cause of all conflict and the only way to end conflict is to end racial distinction… That’s what is so funny about McGowan’s video. It exposes the lie in all its absurdity and everyone can see it.

Australian Aborigines do have their own pan-language that is not Pidgin English called Nyungar, spoken mainly in south and southwestern Australia.  You can hear some of the Nyungar language spoken in this YouTube video.