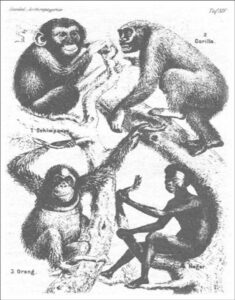 Liz Cambage was born in England to an Australian mother and a Nigerian father.  She has played for the Australian national team, called the Opals in various world cups and the 2012 Olympics.  Cambage plays the Center position. She first played with the New York Liberty where she became the League’s top all-time scorer.  Currently, she is a professional player with the WNBA team, the Los Angeles Sparks.

Cambage is an Afro-hybrid.  She has a white Australian mother and a Nigerian father.  They are separated.

Rumors about her behavior during qualifying games at the Tokyo Olympics had been circulating for months.  More recently video surfaced of Cambage elbowing a Nigerian player in the face during an Australian vs. Nigerian pre-Olympics game.

See the video and a report on the controversy at TheProjectTV on YouTube.  (Cover photo for this article.)

Zito, an Afro-ethnic activist with 57,000 Twitter followers was one of the first to fan the flames, Tweeting out the accusations from the UK Daily Mail on May 28:

“In the ensuing mayhem Cambage slaps another Nigerian player across the face and racially vilifies the entire African team by labelling them “monkeys” and telling them to “go back to your third world country”.”

From women’s basketball blog VCHoops, May 30,

A Nigerian player on Liz Cambage: “She called us monkeys” 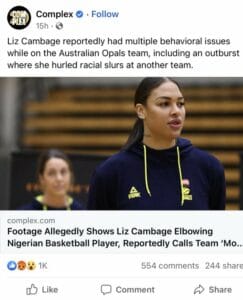 According to New York Post, WNBA star Liz Cambage is accused of directing a racial slur toward members of the Nigerian national team during a scrimmage before last year’s Tokyo Olympics.

“That’s what I recall, the term monkeys, yes. And go back to where you came from,” a Nigerian player told the Telegraph. “She definitely did use monkeys or monkey.”’

Cambage is a partner with Wilson Sports, Inc.  Wilson unveiled an signature Cambage orange and white ball with “Evo NXT construction featuring an enhanced grip and a soft moisture-minimalizing feel.”

“It means a lot to me, Cambage told CBS Sports. “Being able to be a part of this change with the new [Wilson] ball, it’s exciting and to be the face of it all, I’m very humbled by it.” 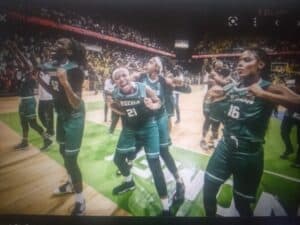 Wilson Sporting Goods Co. and the WNBA recently unveiled the league’s new official game ball ahead of the upcoming 25th WNBA season. The league will be switching to Wilson after having Spalding as the official league ball since the WNBAs inception in 1997. With the announcement, Wilson also introduced three-time WNBA All-Star Liz Cambage as its newest member to the Wilson Advisory Staff.

With the Nigerian controversy some are beginning to question her sponsorship.

If she was an NBA player instead of a WNBA player, you have to wonder how this story would be reported in the mainstream media.

At the moment, Cambage has gotten a pass on these horrific actions. They are just despicable in nature.

Cambage should be punished, but she likely won’t be.

A violent racist? Might want to drop her Wilson.

Additionally, some sports fans are pointing out that if she lied about the foul, which has now been refuted by the video just released, she is most likely lying about the “monkey” slur, as well.

Matt Henderson @MattxH @ecambage:
“unintentionally fouled”… wow why lie? Anyone who has seen the video knows you just lied. And they now think even less of you as you seriously try to act like the foul was unintentional?! Not even worth reading the rest.
For her part, Cambage now fesses up to the found, but insists that she never used the term “monkeys.”  She released a statement:
“I did not use the racial slur towards the Nigerian team that has been circulating.”
0 LovesLove Race Realism No Comments