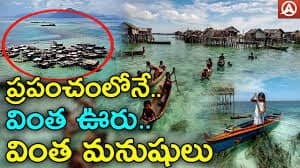 “Aquatic ape theory (AAT) proposes that humans went through an aquatic or semi-aquatic stage in our evolution… the physical difference [between apes and humans] is due to the possibility that our ancestors lived a semi-aquatic existence, which involved activities such as wading, swimming, and diving.” — Biologywise.com

Now more researchers have been trekking to the off-shore environs of Indonesia and the Philippines.

The Bajau, previously referred to as “sea gypsies,” are capable of spending 5 hours in the water in fishing expeditions.  They spend an average of 29 seconds under water before coming up for a breath.  Researchers have found they have larger spleens than their on-shore Indonesia neighbors.  These adaptions could have come within the last 15,000 years, suggesting human evolution occurs much rapidly than previously believed.

“In Southeast Asia, sea nomads known as the Bajau offer a glimpse into how humans may have adapted to an aquatic way of life…

A DNA analysis found that the Bajau had a higher frequency of a specific gene, PDE10A… The Bajau were also more likely to carry certain genes connected with an enhanced dive reflex and for preventing the build-up of carbon dioxide in the blood. According to the paper, the Bajau and their land-dwelling neighbors probably diverged 15,000 years ago, offering plenty of time for the development of specific adaptations for their oceanic lifestyle.”