They got the headline correct, Discover, Sept. 20,

Then they flubbed the sub-header, and repeated the mistake in the meat of the article.

We evolved from chimpanzees and bonobos, and coexisted with several early human species throughout the human evolution timeline.

Second and third paragraphs down:

What Did Humans Evolve From?

Much of human evolution happened in this tiny portion of the world. We evolved from chimpanzees and bonobos, two species that are today found mostly in Central Africa, in places like the Democratic Republic of Congo.

As the Smithsonian at HumanOrigins.edu explains, Chimpanzees, Bonobos and Humans are cousins, descended from the same common ancestor cited in the Discovery piece, Sahelanthropus tchadensis:

Humans and monkeys are both primates. But humans are not descended from monkeys or any other primate living today. We do share a common ape ancestor with chimpanzees. It lived between 8 and 6 million years ago. But humans and chimpanzees evolved differently from that same ancestor. All apes and monkeys share a more distant relative, which lived about 25 million years ago.

Clint Explains at YouTube gives a further, more detailed explanation of the Last Common Ancestor (LCA) with out Chimp and Bonobo cousins. 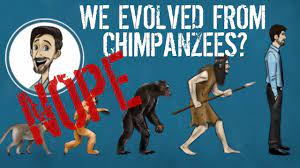 One of these misconceptions (March of Progress graph) is that this creature is a Chimpanzee.  And that it is our direct ancestor.  It is even possible that you’ve been taught evolutionary theory that says we evolved from Chimpanzees or monkeys or something like that.  Well, we didn’t evolve from either of these things.  Unless you want Monkeys to be a mono-phylogentic group.  In which case we wouldn’t just be the descendants of monkeys, we would still be Monkeys.

The principle that you will really need to understand is how to interpret a phylogenetic tree.  While this diagram can be highly misleading. This diagram can be properly understood and summarizes the evolutionary relationships between Humans, Chimpanzees and Monkeys…

The last time Humans and Chimpanzees shared ancestors was here. [Points to dot at the divergence of Chimps and Humans representing 6mya Sahelanthropus tchadensis.]  The thing is over 5 million years ago, there were no Chimpanzees…

The Discover piece than goes on to correctly identify the common ancestor.

Our first known common ancestor is Sahelanthropus tchadensis, a species found in Chad that dates to around 6 million years ago.

Chris Stringer of the London Museum of Natural Science is quoted identifying the first clear Hominid on the path to Homo sapiens – Orrorin tugenensis.

“There’s some evidence that the species stood upright and balanced its head on the base of a skull,” says Chris Stringer, a professor of human evolution at the Natural History Museum London. “But researchers aren’t in complete agreement.” Orrorin tugenensis, a specimen found in Kenya and known as Millennium Man, also dates back to around the same time and was about the size of a chimpanzee.

The author of the piece is longtime science writer Sara Novak. 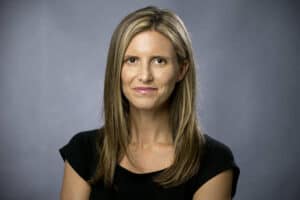 It is unclear whether this was a mistake in her research, or a flub with the copy editing.

Editor’s note – when major science publications make basic errors in evolutionary science, it becomes fodder for Christian Creationists and others to exploit and discredit Darwinism.

Example: Well-produced YouTube video from a couple years ago by the Discovery Institute, “The Monkey Bias.”  From the actor in the video: “Modified Monkeys, is that what we are.  Or is that just a mask some scientists want us to wear.”