ACE2 Receptors, the Denisovans, and their Neanderthal Sidekicks

What is an ACE2 Receptor, Who Has Them, and Why Should I Care?

Coronaviruses like COVID-19 attack something called an ACE2 receptor. Medicines, vaccines virtually all aim at blocking that attack. So it’s an important subject. There’s been a lot of discussion of ACE2 being responsible for 2-3 times as many men getting it, since they have about 3-4 times as many as women. And there’s been discussion of whether it affects Asians more than others. A rush paper said yes…

…others disputed it based on the small sample number and a paper 15 years ago, etc. and of course, political correctness. After all, you make a claim about race being involved, if you are wrong, you are ruined, maybe even if you are right.

In the meantime, the internet, who fears nothing, got on it, and some clever folks looked up the 6 sequences that increase ACE2 receptors and then looked up which percentages are present in Europe, Asia, Africa, and some interesting subgroups and averaged the 6. You can check their work, they give the links. And some of the data before averaging.

Ok, that’s interesting, seems Asians tend to have more. Doesn’t guarantee anything, a rule of thumb, but seems to match what’s happening at the moment…

Denisovans and their Neanderthal Sidekicks

For instance, at the bottom of the table, no close second, is the Tuscans, who have more Neanderthal than anyone on the planet, no close second, with the exception of some Melanesians. The data in the Table is the 1000 Genome Project which didn’t include Melanesians (for some strange reason.)

If it measured continents, the Yoruba are out of place, but not if it’s measuring Denisovan/Neanderthal. They have a lot of Neanderthal or a close relative. Very different than other Africans.

And on that list, as high as anyone in Denisovan are the Chinese and Japanese. Telugu, Sri Lanka, Bengali, is on the East Coast of India, and that’s as much Denisovan as the Chinese. 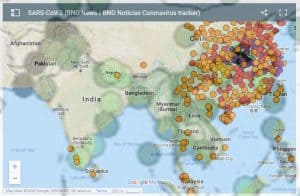 The most popular example of Denisovan genes in existing humans is the one for lungs that gives Sherpa’s the ability to live with little oxygen. 100% have it. The Han Chinese are the only others that have it, at 5%. A gene that gets the lungs to take in more stuff? Seems worth mentioning. About the only thing slightly out of place on the table is the Peruvian. Only traces of Australian/Denisovan left in South America, it can’t be that, and it’s a different system than the Denisovan gene. But it’s someone that’s taking in extra in the lungs to deal with the low oxygen, and it perhaps put them at risk.

Predictions Based on the Denisovan/Neanderthal Theory

Science is the ability to predict experiments, not a bit more or less. So, what does this theory predict? Some obvious things, such as taking off in China, and Japan and Singapore (76% Chinese). But that’s just existing data, it also predicts East India will be hit hard, but not NW India. And which parts of East India. And it predicts mild cases in Africa and Europe, the only death out of 1500 that isn’t Chinese is from Japan, aren’t a fluke, they will continue.

All the above is the 1000 Genomes Project, but they added the missing Melanesians on the maps, and of course, the amount of Denisovan they have is through the roof. There are at least 2 rather different branches of the Denisovans, hopefully being a different branch will protect them. Sure hope so.

And it predicts where we should put our resources, how we solve the problem, and it looks like political correctness is preventing it. One thing’s for sure, if it’s around long enough, in large enough numbers, it is certain it will mutate to attack us all.