Archaeologists ask who was the common ancestor of Neanderthals, Denisovans and us, Homo sapiens?  That’s been a bone of contention for decades.  Within the last couple of years, its grown into an intense debate. 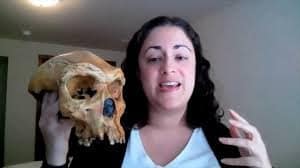 Many anthropologists place Kabwe 1 in Homo heidelbergensis, which ranged across Africa and Europe between about 700,000 and 300,000 years ago. It has long been a candidate for the common ancestor of three later groups: modern humans (Homo sapiens), the Neanderthals of Europe and west Asia, and the Denisovans of east Asia.

The Kabwe 1 skull was found in 1921 in Rhodesia by quarrymen.  They didn’t take care to do any marking of the exact location.  It was long presumed to be roughly 500,000 years old.  But recently new dating methods have placed Kabwe 1 at 299k years old.

This has created quite a conundrum.  Continuing:

The age of Kabwe 1 means the skull probably didn’t belong to an ancestor of humans, Neanderthals and Denisovans, says [Chris] Stringer. Genetic evidence suggests the last common ancestor lived about 600,000 years ago, so Kabwe 1 is too recent.

Jebel Irhoud (Morocco) and more recent finds in Chad, suggest Homo sapiens emerged 325 kya.  So, if Heidelbergensis was around 299,000 kya how could it be the common ancestor?  A number of archaeologists and paleontologists from Spain propose:

A better candidate for the common ancestor is Homo antecessor, says José María Bermúdez de Castro of the National Centre for Research on Human Evolution in Spain. These hominins lived in northern Spain between 1.2 million and 800,000 years ago.

“H. antecessor shows a unique combination of dental and skeletal features,” says Bermúdez de Castro. Its face was quite modern: more like ours than like that of H. heidelbergensis.

There is a alternative theory.  What if Antecessor is actually Euro-Heidelbergensis?

They [Spainish archeological team] suggest H. antecessor may have evolved from a population of H. erectus living in Africa more than 1.5 million years ago and then migrated to Europe… the researchers say H. heidelbergensis is too similar to Neanderthals to be a direct ancestor of modern humans. Instead, H. antecessor gave rise to H. heidelbergensis, which then gave rise to Neanderthals.

Archaeologist: Heidelbergensis Multiregionalism leading to the “major races” we have today 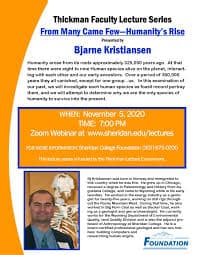 A geologist and archaeologist with affiliated with a small community college in the outback of Wyoming takes it a step further.  A full multiregional model?

Bj Kristiansen was born in Norway. He received a degree in Paleontology and History from Augustana College… He worked in the energy industry as a geologist for twenty-five years, working on drill rigs throughout the Rocky Mountain West. He also worked as a geologist and geo-archaeologist. He currently works for the Wyoming Department of Environmental Quality, land Quality Division and is also the adjunct professor of Anthropology at Sheridan College. He is a board-certified professional geologist.

Heidelbergensis started showing up about 700k years ago in Africa and is very important to our development.  He was a species who lives in Africa and western Asian between 700k and 200k years ago… a very successful human species. There’s a lot of features that the skull [Kabwe 1] shares with Homo erectus and modern human species. This individual if anything could be called a missing link.  [Emphasis added]

The Neanderthals, Denisovans and us are all considered to be descended from Heidelbergensis.  That is the one that is considered to be a precursor in Africa, as well as western Europe, and central Asia…  they could walk from continent to continent over time covering a long distance and they too evolved in different parts of the world.

Recommended: Lindsay at Species Shorts on YouTube, May 20, 13 minute video on Homo heidelbergensis.