As Congolese immigrants span out around the globe, a new Ebola wave strikes Central Africa

Health Minister Eteni Longondo confirmed that four people had died from Ebola in Mbandaka. Mbandaka is a transport hub on the Congo River with a population of more than a million — Dubailad.com

There are direct flights from Kinshasa to Washington Dulles airport on Turkish airlines.

A New Migrant Surge at the Border, This One From Central Africa 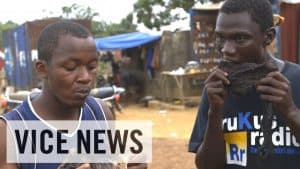 hundreds of migrants from another part of the world have caused city officials already busy with one immigrant surge to scramble on a new and unexpected one. Men, women and children from central Africa — mostly from the Democratic Republic of Congo and Angola — are showing up at the United States’ southwest border after embarking on a dangerous, monthslong (sic) journey.

The number of African migrants traveling through Mexico to seek protection in the US is on the rise, showing that the Central American corridor to the border isn’t just traveled by those who are native to the region.

Mexican immigration officials encountered 5,800 Africans from October 2018 to September 2019, up from 2,700 the previous year…

Illegal immigration at the U.S. border with Mexico has slowed somewhat (Pew Research Center) in recent months as a result of new procedures implemented by the Trump administration.  Much of the slowdown has to do with Coronavirus restrictions.  But Congoloese and other African immigrants are still pouring into Europe.

Greece is fighting back against an illegal immigrant wave mostly from Turkey.

The Greek City Times reports, fully 9% of illegal immigrants, were documented to be from the Congo.

the Democratic Republic of the Congo has experienced significant migration outflows…

While most Congolese migrants head to neighboring countries, destinations have diversified, with an uptick in those leaving for opportunities in Europe and beyond.

The Ebola virus has returned to the Congo.  Yes, the WHO is reporting.  They thought they had exhausted it, snuffed it out.  But it’s come back.

the World Health Organisation (WHO) says authorities in the country have now identified six cases, including four deaths in the north near Mbandaka.

Unicef said four other people were being held in isolation at a hospital in Mbandaka,

The victims died on 18 May but test results confirming Ebola only came back over the weekend, Congolese health minister Eteni Longondo said.

SkyNews further notes, “Mbandaka, which is home to 1.2 million people.”

According to Dubailad.com 33 people died in 2018 from Ebola in the one Congo province hardest hit.

YouTube documentary on bushmeat (monkeys and fruit bats) and Ebola in west Africa.