Tik Tok youth interning at an archaeological site in the Republic of Georgia, make a human fossil find of a lifetime 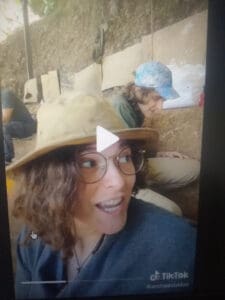 The dawn of Tik Tok archaeology?

Giorgi Bidzinhashvili leads of team of mostly youthful aspiring archaeologists in the Republic of Georgia. About a dozen archaeology students from the UK, United States and Canada, are interning for Bidzinashvili.  Additionally, local volunteers from the surrounding area, and other regions of Georgia, also work on the site.  They are collectively known as The Squad.

Orozmani is about 4 kilometers from the famous Dmanisi site, located in southern Georgia.

From the Greek Reporter, Sept. 11:

Orozmani lies near the village of Dmanisi, where in the late 1990s and early 2000s, human skulls from about 1.8 million years ago were discovered. The Dmanisi findings altered experts’ perceptions of early human evolution and migration patterns because they were the oldest discovery of its sort outside of Africa.

The interns stay at a hostel in Kvemo Orozmani.  Every day Bidzinashvili loads his team of 20s somethings up in the SUV and drives them out to the site.  On the way, they make TikTok videos of their favorite 1980s to 2000s dance pop songs.  Their repertoire includes: the new wave classic “Come on Eileen,” and Carly Rae Jepsen’s monster hit “Call me Maybe.” 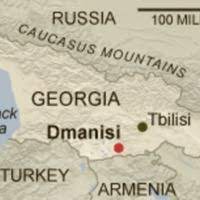 Bidzinashvili’s Tik Tok channel can be found at archaeobidzo.  Many of the videos are of the team clowning around, having fun.  However, others such as #diggingscience are more serious, showing the precise and delicate job of extracting fossils from the hard soil.

The team has previously discovered numerous ancient animal bones such as from saber tooth cats, and stone tools made by humans.  Then earlier this year, British archaeology student Jack Peart discovered a tooth at the site.  The team were uncertain at first, what they had found.

“The implications for humans leaving Africa are enormous.  It extends Dmanisi all the way over to here.  And it really solidifies Georgia as the important place for paleo-anthropology and the human story in general” — Jack Peart, archaeologist

Note – See an excellent short video of Jack Peart and The Squad team doing excavations at the Orozmani site at the Reuters article.

From Reuters, via The Economic Times India, 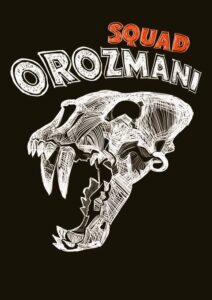 Georgia became the site of new historical development as archaeologists found a 1.8 million years old human tooth. The discovery was made near the Orozmani village located close to Dmanisi… the location where archaeologists had previously discovered human skulls belonging to the same era as the tooth… The skulls were the oldest human remains not found in Africa during that time.

Another archaeologist, Giorgi Kopaliani, with the Georgian National Museum, said that Peart discovered the tooth and showed it to his team that led the excavation. After that, the Museum contacted their paleontologist, who confirmed the tooth belonged to a human.

“The implications, not just for this site, but for  Georgia and the story of humans leaving Africa 1.8 million years ago, are enormous. It solidifies Georgia as a really important place for paleoanthropology and the human story in general,” 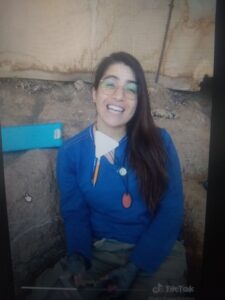 Homo erectus is thought to have lived from 1.9 million years ago, possibly a diverged lineage of Homo habilis.  Homo ergaster is the nomenclature commonly used for the African subspecies of H-erectus.  Homo erectus may have survived til 70,000 years ago in southeast Asian, and might even have lasted in isolated populations in Melanesia to 20,000 years ago.

[With an] expanded braincase relative to the size of the face. Homo erectus fossils (sometimes called Homo ergaster) are the oldest known early humans to have possessed modern human-like body proportions with relatively elongated legs and shorter arms compared to the size of the torso.

Homo erectus in Eurasia, presenting problems for Recent Out of Africa?

Homo erectus had an average brain capacity of 900 to 1,200cc.  H-erectus likely gave rise to Heidelbergensis and/or Homo antecessor, which are commonly believed to be the direct ancestors of archaic Homo sapiens, some 500,000 years ago.

More from the Greek Reporter:

Homo erectus, a hunter-gatherer species that predates modern humans, is thought to have begun migrating out of Africa around two million years ago. However, the Georgia sites contain the earliest human remains ever discovered outside of Africa…

The recent find… adds to the growing body of data, suggesting that early people originally migrated from Africa to the rugged South Caucasus.

Homo erectus in Eurasia 1.8 million year ago, presents challenges for the classic Recent Out of Africa model.  It is likely that H-erectus introgressed with arriving Homo sapiens, which would imply more Multi-regional origins, and a point of separation and divergence between Africans and Eurasians. 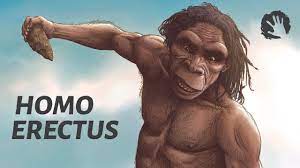 Lurking deep in your DNA, you may have a ghostly remnant from a “super-archaic” protohuman that isn’t our ancestor. This is because over half a million years ago, “Neandersovans” – the common ancestor of Neanderthals and Denisovans – intermixed with a small-brained, super-archaic hominin. Hundreds of thousands of years later, Denisovans did it again. And after that, Neanderthals and Denisovans intermixed with ancestors of modern humans.

An unidentified ancient human lives on in modern genes

We know that the Denisovans, a group of extinct humans who lived in Asia, and Homo sapiens also intermingled. It turns out that, in doing so, they passed on some of the genes of this mysterious ancestor — what the researchers are calling a “super-archaic” population…It’s estimated, in turn, some modern humans could hold about 15 percent of these “super-archaic” gene regions…One potential contender could be Homo erectus…
Note – for a good overview of Homo erectus we always recommend right-of-center paleo-anthropologist Stefan Milo’s video, pictured above.
0 LovesLove Archaeology No Comments