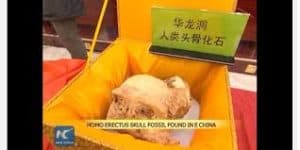 Multiregional Origins gets a boost – Denisovan with partial Homo erectus as many Chinese Anthropologists have long believed?

Researchers in southern China were excavating a partially collapsed cave and discovered a hominid skull, alongside a number of other animal fossils, and some stone tools.  The find seems to confirm Chinese Anthropologists’ belief in mulit-regional origins.

Discover describes the skull as  “nearly complete, and in decent shape, allowing the team to draw some firm conclusions about its anatomy.”

For decades, particularly in the West, the Recent African Origin model of human evolution (RAO) has dominated. According to this hypothesis, AMHs evolved in Africa and then, in the last 50,000-80,000 or so years, spread out across Eurasia, displacing or absorbing any isolated populations of archaic humans still hanging on.

Over the last decade, new fossil finds outside Africa have pushed back the dispersal date…

Meanwhile, an alternate model of human evolution, Multiregionalism or Regional Continuity, has gained traction, particularly in East Asia. According to multiregionalists, when H. erectus left Africa almost 2 million years ago, these early explorers didn’t die out. They fanned out across Eurasia and continued to evolve, eventually becoming regional populations of H. sapiens before other populations of H. sapiens left Africa. [Emphasis added.]

“At about 300,000 years old, HLD 6 may be evidence of regional continuity, a transitional human that represents the evolution of archaic East Asian H. erectus populations into East Asian.”

European Identitarians agree with the Chinese on multi-regional origins.  Lucas Bourbon from France:

The theory of “African Eve” and “out of Africa” can now be placed within the radius of the dead ideologies… European men do not come from Africa.