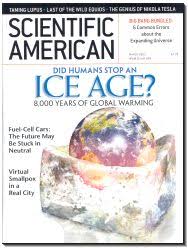 John Horgan is the director of the Center for Science Writings at the Stevens Institute of Technology. He is a graduate of Columbia University.  He is a blogger at Scientific American. He is also a frequent contributor to the National Geographic and the NY Times. His books include The End of Science, The End of War and Mind-Body Problems. His books are available at mindbodyproblems.com.

Scientific American writer asks – How Can We Curb the Spread of Scientific Racism?

It was a review of Angela Saini’s book, “Superior: The Return of Race Science.”  In the review Horgan harshly criticizes Dr. James Watson for suggesting racial differences in IQ.

Saini argues that racism is implicit within the concept of race… “It’s the notion that groups of people have certain innate qualities” that can “define the passage of progress, the success and failure of the nations our ancestors came from.” Yes, that’s what Watson was saying.

He then attacks Charles Darwin and Thomas Huxley. Continuing:

Darwin came from a family of abolitionists… He nonetheless believed, as Saini puts it, that “men were above women, and white races were above all others.” Thomas Henry Huxley, Darwin’s bulldog, supported abolition but said, “The highest reaches in the hierarchy of civilization will assuredly not be within the reach of our dusky cousins.”

Those who espouse this ideology call themselves “race realists.” They insist that racial injustice and inequality “isn’t injustice or inequality at all,” Saini explains… Race realists claim that “they are challenging the politically correct wider world by standing up for good science and that those who oppose them are irrational science deniers.”

Horgan and Saini mention Dr. Edward Dutton, Mankind Quarterly, a friend of this site, as having particularly egregious views on race.

“Race realists” have viciously attacked her, as she disclosed in her recent Scientific American column “The Internet Is a Cesspool of Racist Pseudoscience.”

The article linked is from July 29 in SA.  Saini said of Subspecieist.com editor Eric Dondero in the opening paragraph:

Last month, I temporarily deactivated my Twitter account following a colossal dump of racist abuse into my feed, including a man in Texas whipping up his followers to phone into an NPR radio show on which I was a guest to ask about “white genocide.” [Emphasis added]

Horgan ends by calling for massive censorship of wrong-think on Race Realism:

I once suggested that, given the harm done by research on alleged cognitive differences between races, it should be banned. I stand by that proposal. I also agree with Saini that online media firms should do more to curb the dissemination of racist pseudoscience (Sic).

Subspeciest.com repeatedly solicited Horgan for a comment for this piece on Twitter, but has received no response.

Editor’s note – As our masthead says explicitly, this website abhors racism.  We are in favor of maximum diversity for our human species.  We simply recognize that different subspecies have different characteristics and traits.

Additionally, for the record, I did not “whip up followers” of this website to flood Saini’s Twitter account.  That is patently false. She is referring to my Tweets asking her to answer whether or not modern Eurasians have Neanderthal DNA.  She refused to answer.