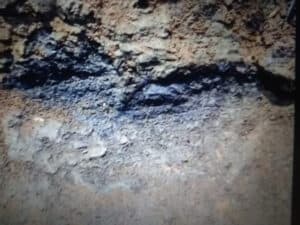 Lee Berger has made yet another amazing discovery.  Dr. Berger is a longtime tenured professor of archaeology and evolutionary studies at the University of Witwatersrand in Johannesburg, South Africa.

Born in Georgia USA, he, his wife Jacqueline a radiologist, and family have lived in Johannesburg for the last three decades. Dr. Berger, is a worldwide lecturer and author.  He is widely considered to be among the top 3 to 5 paleo-anthropologists in the world.

From his bio at Brittanica:

After he received a B.A. in anthropology from Georgia Southern University in 1989, he studied under noted South African paleoanthropoligist Phillip V. Tobias at the University of the Witwatersrand in Johannesburg. Berger received a Ph.D. in paleoanthropology from the University of the Witwatersrand in 1994 and became a postdoctoral research fellow in the university’s department of anatomy and human biology in 1995. Between 1996 and 1997, Berger served as the director of the university’s paleoanthropology research group in the School of Anatomical Sciences.

Note – See our most recent article here at Subspecieist by South Africa’s Martha Christina, on Phillip Tobias, a Retrospective on the life of the famous fossil hunter.

In 2008, while out on an excursion with his 9-year old son Matthew, their dog and an assistant from the university, Mathew stumbled upon a Hominin fossil later to be named Australopithecus sediba. 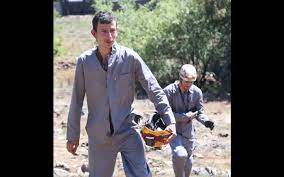 In 2013, Dr. Berger employed three amateur cave explorers – Steven Tucker, Rick Hunter and Harley riding former diamond mine explorer Pedro Beschloss to search for Hominin fossils in caves surrounding Johannesburg. Within a month they struck paleo-anthropology gold in the nearby Rising Star cave system.  The trio knocked on his door late one night, with photos of the discovery of a lifetime – Homo naledi.

over 1550 specimens from at least 15 Homo naledi individuals were recovered from this site. This excavation remains the largest collection of a single hominin species that has been found in Africa. Rick Hunter and Steven Tucker found an additional 133 Homo naledi specimens in the nearby Lesedi Chamber in 2013, representing at least another 3 individuals – two adults and a juvenile. In 2017, the Homo naledifossils were dated to between 335,000 and 236,000 years ago.

“If Lee never made it into that cave, we would never have seen this… [this] has changed our view of the world forever.” — Agustin Fuentes, Prof. of Anthropology, Princeton Univ.

Dr. Berger has been hyping a new major discovery for weeks in media interviews and on Twitter.  Of note, like the great paleo-anthropologist Louis Leakey before him, Berger has received criticism throughout the years, for being overly dramatic and even speculative of Hominin phylogenetic (tree of human origins) positioning.

On December 1, at the Carnegie Science Center in Washington D.C. Professor Berger delivered his presentation.  It was carried on live stream by Vimeo (replay here.)

At the start of his presentation Berger gives a detailed history of human origins, phylogeny and an overview of archaeological digs in South Africa and other African regions.

Dr. Berger has had a husky build.  Without informing his wife of his intentions, he shed 55 lbs.  He was determined to squeeze into the Dinaledi chamber.  Berger knew, “it was likely the most dangerous thing I’d ever do.” 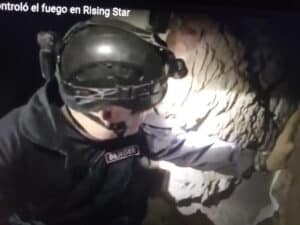 I have said many times my ego is probably too large to get through a 7.5 inch slot.  I said it publicly.  (Berger plays a video where he says, “I know I will never set foot in that chamber.”)  Until I lost 55 lbs.

Finally in the chamber with one companion (who appears to be Steven Tucker), Berger explored the area.  He looked up.  On the roof of the chamber, were soot particles, indications of fire use.

The entire roof of the chamber where we’ve spent the last 7 years working is burnt and blackened.

Berger describes his next moments as “serendipitous.”

I then climbed out of the chamber and almost died.  Literally.  Took me an hour and seven minutes to get out of that chamber. Really.

He then describes meeting up with his team leader and NatGeo explorer Keneiloe Molopyane in another chamber. She had just discovered a cooking area, “a tiny hearth, with very specific burnt antelope bones…”

“How could homo naledi deal in the dark” asks Lee Berger. Inside the chamber he realized the “roof” had blackened areas with soot particles indicating an astounding use of fire. Later his team found burnt animal bones in another chamber. “We clearly had been missing things…I don’t think they were living there, I think they were using the spaces…

“Homo naledi had a complex technological culture (strategic use of fire) and much, much more” — Agustin Fuentes, Prof. of Anthropology, Princeton Univ.

José Luis Moreno (Twitter bio), is a PhD student in biological anthropology and a YouTube channel podcaster.  He was the very first worldwide to break the news of Berger’s presentation the night of Dec. 1.  Moreno explains (en español) the profound impact of Berger’s find:

Proof undeniable, of fire, not only the use of fire to illuminate.  Homo naledi could access the chamber the Lesedi chamber, the Dinaledi chamber, the rest of the rooms, spaces that are really large, as I say, not only fire, but also… [dramatic pause] the burning of bones of animals.

I’m going to leave that here, ready? He found evidence of igniting fire, burned wood…  and burned (calcined) bones.Homo naledi had a complex technological culture (strategic use of fire) and much, much more

Professor Berger said that Homo naledi had a brain capacity just a little bit larger than a modern day Chimpanzee, “about the size of a large orange.” 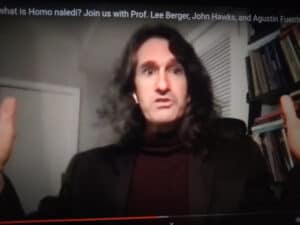 What is most startling is that Homo naledi with such a small brain size was able to conceptualize controlled fire use for not only illumination throughout the cave, for cooking, but also, quite possibly to scare away predatory animals.  Although, the latter is speculative on Berger’s part, and there is no evidence to indicate usage of fire as a weapon.

From Agustin Fuentes, Princeton University PhD, a close-friend and associate of Lee Berger’s and part-time member of the Rising Star team:

Lee Berger is right: H. naledi had a complex culture (fire, treatment of dead, and more…) with a small brain… bu[t] likely an amazing set of social dynamics and relations…

Utilization of fire for more than just illumination, “this changes everything that we believed before…” — Biological Anthropology PhD student José Luis Moreno

As a breathless Moreno describes the discovery of the burnt rocks, charcoal and blackened sediments for “something more than illumination,” such as cooking, “this is culture… this changes everything that we knew before.”

Reaction from the paleo-anthropology communist so far has been positive, but with some caution. 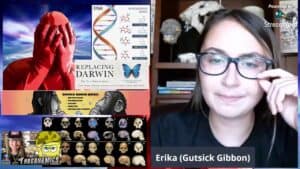 Oh wow looks like Lee Berger has announced the discovery of hearths for Homo naledi! Big if true.

Hugely intrigued by the claims for fire use in deep chamber by Homo naledi… Going to watch this!

Gonna be honest, I had hoped for the new #Homonaledi discoveries being associated stone tools… Potential evidence for fire use (catching? Making?) is also quite interesting though!

Note – Dr. Berger Re-Tweeted Subspecieist’s congratulations on his find to his 18,000 followers hours after his presentation at Carnegie. Additionally, see another excellent article on the Berger presentation at Seth Chagi’s World of Paleoanthropology site, “Fire and Homo naledi.”