Among publications she has written for: National Geographic, Wired, the BBC, NBC News and Scientific American

Late Saturday night a crazed black man with a machete named Grafton Thomas attacked 5 Jews at a synagogue in Monsey, New York. All 5 were hospitalized, one with serious injuries.  He was captured in Harlem, hours later. 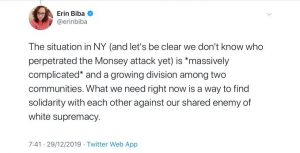 Within the hour information started emerging all over social media and even on mainstream news outlets, that the attacker was a black male.  Biba started to receive extreme criticism on Twitter.  Shortly after receiving negative Tweets she deleted public viewing of her account. 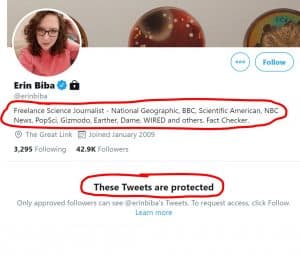 Biba is a Freelance Journalist.  But she has quite an impressive list of publications that she has written for.  Of particular interest to readers of this website, Biba has written for National Geographic, the BBC and Scientific America.

From the masthead of Popular Mechanics: 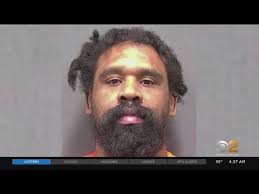 Erin Biba is a science journalist who writes about climate change, field science, biology, technology, and other science-related topics. Her work has appeared in Scientific American, WIRED, The Daily Beast, Popular Science, and BBC.

Biba received a great deal of attention over the Summer when she sparked a controversy about the animated film, The Lion King.  In an article for NatGeo she argued that lion packs were actually feminist, with male lions being marginalized:

In real life, Simba’s mom would be running the pride…  They catch the vast majority of the food, and they guard the territory from intruders…

Biba is also a proponent of modern Homo sapiens eating bugs instead of meat to “save the planet.”  She writes in an opinion piece from 2018 in the Daily Beast: “A Cocktail of Bugs and Yeast could make the ultimate Biofuel.”

Biba started her career at Wire.  She was Wire’s Fact Checker, but increasingly moved to the journalism side. One of her early pieces was titled, “We can save the world by Eating Bugs and Drinking Urine.”

if humanity is going to survive, we may have to learn to overcome the ick factor.

She even suggested mass psychotherapy of Western cultures to get them to like eating bugs.

Rozin says, you could desensitize people over a long period of time. “Marketing can do a lot of this,” he says. “Overcome the disgust memory. It’s a basic form of psychotherapy.”

Right after her 5 year stint at Wired, Biba did an interview with a Rutgers college TV channel. She boasted through the hour long interview about her great successes with her Science journalism career, even though she had zero background or credentials in the sciences.

“I was always interested in science, but I always thought you needed to have some sort of background in science.  Ya know a science degree or something… but when I got to Wired, there are no beats…  everyone kind of writes about what makes them excited.”

“I actually think it’s a great benefit to me, that I don’t know anything about science…”