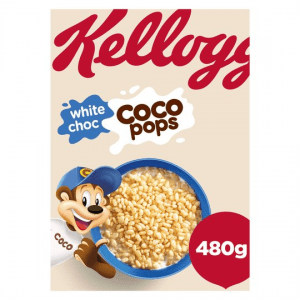 News this morning, Aunt Jemima syrup is no more.  Quaker Oats has decided to dump the 120 year old iconic brand over charges of racism.

Another brand, Tasty Coon’s cheese, is also on the chopping block.  It’s named after the company’s founder, Edward Coon.  (Like the Democrat US Senator from Delaware – Chris.)

Fiona Onasanya, a Black Lives Matter activist and former member of the UK parliament, claims that Kellogg’s Rice Krispies is a racist cereal because it has “three white boys” as mascots… Onasanya doubled down on her charge and, in the process, proved she was an ignorant fool.

Onasanya’s online attack quickly drew ridicule from users on Twitter who made sure to point out that the beloved characters of Snap, Crackle, and Pop are also the brand champions for Cocoa Krispies, the chocolate flavored Rice Krispies. 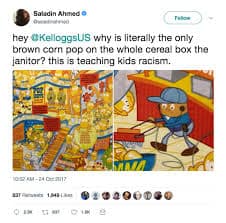 Kellogg’s told the Daily Mail in a statement that it “stands in support of the black community.”

“We do not tolerate discrimination and believe that people of all races, genders, backgrounds, sexual orientation, religions, capabilities and beliefs should be treated with the utmost dignity and respect,” the company said, going on to note that the Coco Pops monkey is also the same character representing the white chocolate cereal. “The monkey mascot that appears on both white and milk chocolate Coco Pops, was created in the 1980s to highlight the playful personality of the brand.”

A perusal of Twitter, “Coco Pops” shows unanimous support for Kellogg’s.  Out of 30 Tweets not one was in support of Onasanya’s Coco Pops ban.  Although, one user, Tom Highly of the UK, podcast presenter on YouTube, made an interesting observation.

For those critics going on at #Kellogg’s over being racist over coco pops & rice crispy’s.

Tom shares a photo of two boxes of White Choc Coco Pops with a light-skinned monkey as the mascot on the box.

This is not Kellogg’s first run-in with the hyper politically correct crowd over Coco Pops.  In 2017, according to Channel 7 News out of Columbus, Ohio, Kellogg’s was criticized by black activist groups for it’s portrayal of a black janitor on the back of the box.  The only black character on the back of the box in the graph, was the janitor.  Kellogg’s vowed to change the back cover art.

At first glance it may seem innocent enough.  Pops at a shopping mall.  That’s until you see the one brown pop dressed as a janitor.