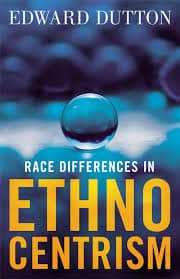 Jolly Heretic – In the animal kingdom a “subspecies, a breeding population separated from the same species, long enough to be noticeably evolved to a different environment but not long enough to be unable to have fertile offspring with the other group”

British right-wing YouTuber and zany actor/comedian Edward Dutton has released a new book, “Race Differences in Ethnocentrism.”  Dutton highlights different survival strategies employed by various ethnic groups.  He recognizes that an ethnic group can be both positive for in-group preference and positive for peaceful relations with outside groups.  Dutton asserts the two are not mutually exclusive.

Dutton’s positive/positive ethnocentrism is the position held by this website: Strong tribes, strong ethno-states, but accepting and tolerant of others.

Excerpted from a review by Occidental Observer, May 23, Andrew Joyce, Ph.D. :

Watching his incredibly entertaining Jolly Heretic You Tube channel it’s easy to forget that Ed Dutton is also an extremely serious, and increasingly prolific, researcher, author, and scientist… In Race Differences in Ethnocentrism, Dutton, who has collaborated with Richard Lynn on a number of occasions, builds impressively on the work of the latter and has offered, in this text, one of the most informative, formidable, pressing, intriguing, and poignant monographs I’ve read in years.

A few paragraphs down in the review, this particularly relevant paragraph for readers of this site:

In the second chapter, Dutton answers the question, ‘What is Race…’ a well-presented defense of the concept of race and its unabashed employment as a scientific system for studying and categorizing humans.  In Dutton’s presentation, ‘race’ is employed to refer to what in the animal kingdom would be a subspecies: a breeding population separated from another of the same species, long enough to be noticeably evolved to a different environment but not long enough to be unable to have fertile offspring with the other group.