Matthew Yglesias is the longtime editor for the far leftwing tech blog Vox.

From his bio at Vox: 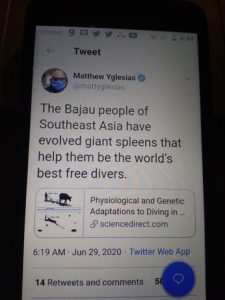 Matthew Yglesias co-founded Vox.com with Ezra Klein and Melissa Bell back in the spring of 2014. He’s currently a senior correspondent focused on politics and economic policy, and co-hosts The Weeds podcast twice a week on Tuesdays and Fridays.

Before launching Vox, he was the author of the Moneybag column for Slate and before that he wrote and blogged for Think Progress, The Atlantic, TPM, and The American Prospect.

Yglesias rocked the race realist world early Monday morning with a Tweet stating that “the Bajau people or Southeast Asia have evolved giant spleens that help them be the world’s best free divers.”

Human Bio-Diversity advocate and friend of this site Steve Sailer of Takimag.com was the first to notice it.  He Tweeted:

Bo Winegard, an evolutionary psychologist, formerly with the University of Marietta responded to Sailer’s Tweet:

“Lol, I was just about to say that Yglesias is a minute away from swallowing the red pill.”

Yglesias was remarking on a research paper published in 2018 on the “Sea Nomads” at ScienceDirect.com: 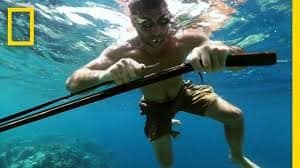 Understanding the physiology and genetics of human hypoxia tolerance has important medical implications, but this phenomenon has thus far only been investigated in high-altitude human populations. Another system, yet to be explored, is humans who engage in breath-hold diving. The indigenous Bajau people (“Sea Nomads”) of Southeast Asia live a subsistence lifestyle based on breath-hold diving and are renowned for their extraordinary breath-holding abilities…

Using a comparative genomic study, we show that natural selection on genetic variants in the PDE10A gene have increased spleen size in the Bajau, providing them with a larger reservoir of oxygenated red blood cells.

We wrote on the Bajau people and their specially adapted abilities here at Subspecieist.com back in March of 2019.