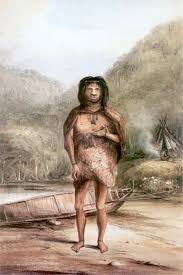 I was pleased to be a guest on Ben Barron’s podcast the other day.  Ben, based in Atlanta, is a liberal.  But he was a fair and informed host.

The show veered into politics which overshadowed evolution discussions.

“I’d like to say I’m an Anarcho-Capitalist in my heart; a practical libertarian Republican”

Towards the middle and end we touched on more human evolution, human variation matters.

Eric: Look dude, 7.5 billion people on this planet. Every single one of us is an ape. We are all primates.  Basically the 3rd Chimpanzee.

On race mixing and miscegenation against whites:

“At what point do you damage our species?  At what point do you get rid of specialization? …  How do we know that those Tasmanians and Tierra del Fuegians [that went extinct, exterminated by the British] didn’t have a unique genome. And had a very unique DNA that could’ve been valuable to the Homo sapien species.”

It’s a quick 30 minute listen.  Give it a like at YT.  Please pass it on to others.  And I recommend subscribing to Ben’s YouTube channel.