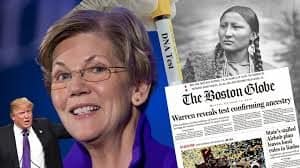 Ben Winegard – “the Darwinian paradigm is the most powerful paradigm in the biological and social sciences… Human variation is inherently fascinating to me.”

Democrat Presidential candidate Elizabeth Warren has been accused of cultural appropriation for claiming American Indian ancestry with the Cherokee tribe.  Warren, a Senator from Massachusetts, is originally from Oklahoma.  A year ago she took a DNA test.  Her tests came back with less than 1% American Indian ancestry.  The less than 1%, the test administrator conceded, could actually be Mestizo-Mexican.

Elizabeth Warren Stands by DNA Test. But Around Her, Worries Abound.

Ms. Warren’s allies also say she unintentionally made a bigger mistake in treading too far into the fraught area of racial science — a field that has, at times, been used to justify the subjugation of racial minorities and Native Americans.

Ms. Warren has also troubled advocates of racial equality and justice, who say her attempt to document ethnicity with a DNA test gave validity to the idea that race is determined by blood — a bedrock principle for white supremacists and others who believe in racial hierarchies.

Many social media users in the race realism and human biodiversity movement are familiar with Bo Winegard, an outspoken, flamboyant and unabashed race realist college professor from Georgia.  But Bo has a brother Ben who is not as well-known.  Ben Winegard was a professor of psychology at Carrol University in Helena, Montana.  Currently he hangs his hat at libertarian/conservative Hillsdale College in Michigan.

Like many individuals loosely affiliated with the HBD (human biodiversity) community, my motives have been repeatedly impugned and I have been accused of proffering unsavory, even incendiary, views (I’ve also been attacked for working at Hillsdale College!!)

I’m interested in HBD for the simple reason that I think the Darwinian paradigm is the most powerful paradigm in the biological and social sciences. To dodge the ramifications of Darwinism is intellectually dishonest. And human variation is inherently fascinating to me.

4) I do not think that an honest study of these differences has clear policy implications. I am a dedicated progressive Democrat (my political heroes are FDR and Truman). As of now, Elizabeth Warren is the candidate that I am supporting for 2020

Brother Bo, has been critical of Elizabeth Warren, writing in Quillette, March 9, 2019:

For a long time, I considered the loose collection of ideas and assumptions I will call “progressivism” to be a regrettable but mostly tolerable side effect of affluence. This quasi-ideology—espoused by prominent progressives from the academy and Vox to Ocasio-Cortez and Elizabeth Warren—holds that, inter alia: (1) All demographic groups are roughly equal on all socially valued traits; (2) racism, sexism, and other forms of bigotry are ubiquitous; (3) almost all demographic disparities are caused by unfair discrimination; (4) diversity is an unalloyed good; and (5) there are many bigots who stand in the way of social progress, but eventually history will redeem the noble and we will inhabit a just society… The most fundamental flaw of this thinking is that it is premised upon a profoundly inaccurate view of human nature.