LeBron James, NBA star displays shocking archaic like gait in walk out of US National Anthem

LeBron James stormed out of the singing of the National Anthem last night before the NBA’s season opener against the Los Angeles Lakers.

From the Washington Examiner, Oct. 23 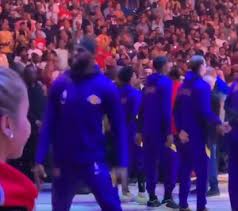 ESPN tweeted out video on Tuesday night of James shouting, “Let’s go,” while the anthem was still being sung.

Outrage online included those who demanded James show more respect for the anthem and others who joked he would have been more respectful of the Chinese national anthem.

The video shows James using a clearly threatening grimace, along with what many might regard as a primitive gait.  James’s unusual gait has been noted before.

So if LeBron spends all the money that he does on his training, why here is he walking with lack of internal rotation in his hips on the follow through gait? 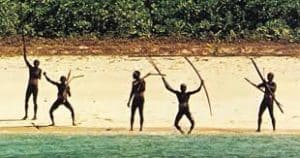 King James has a subtle irregularity in his gait as he walks to the locker room at halftime.

A YouTube video was even produced in 2014 by Chong Xie, titled, “LeBron James Walking Gait Analysis.”  Xie’s website is “Secrets of Athleticism.” Xie notes at the site, “if we strip away the shoes from our basketball elites… LeBron James… you’ll be shocked to see exactly how their feet work…”

Trabecular Evidence for a Human-Like Gait in Australopithecus africanus

Although the earliest known hominins were apparently upright bipeds, there has been mixed evidence whether particular species of hominins including those in the genus Australopithecus walked with relatively extended hips, knees and ankles like modern humans, or with more flexed lower limb joints like apes when bipedal. Here we demonstrate in chimpanzees and humans a highly predictable and sensitive relationship between the orientation of the ankle joint during loading and the principal orientation of trabecular bone struts in the distal tibia that function to withstand compressive forces within the joint. Analyses of the orientation of these struts using microCT scans in a sample of fossil tibiae from the site of Sterkfontein, of which two are assigned to Australopithecus africanus, indicate that these hominins primarily loaded their ankles in a relatively extended posture like modern humans and unlike chimpanzees. In other respects, however, trabecular properties in Au africanus are distinctive, with values that mostly fall between those of chimpanzees and humans. These results indicate that Au. africanus, like Homo, walked with an efficient, extended lower limb. [Emphasis added]

Australopithecus africansus, 4 to 3 million years ago, is believed to be in the family tree of modern humans, quite possibly an ancestor of later hominids including Homo naledi and/or Ergaster.  As noted at this site, Dr. Lee Berger, John Hawks and other noted Anthropologists speculate Naledi and/or Ergaster to be directly ancestral to modern Sub-Saharan Africans.

More from an anatomical perspective from a research paper published in 2014, by Laura Tobias Gruss and Daniel Schmitt,

The evolution of the human pelvis: changing adaptations to bipedalism, obstetrics and thermoregulation

An examination of pelvic anatomy in the fossil record reveals the varying pressures on the pelvis during human evolution. The evolution of the pelvis in the earliest hominins—Ardipithecus ramidus, Australopithecus afarensis, Au. africanus and the more recent Au. sediba—shows derived features relative to apes, patterns that make enormous logical biomechanical sense in terms of the appearance and evolution of bipedalism in our lineage.

To consider the role of the pelvis in locomotion, obstetrics and thermoregulation and the way in which these different pressures affected pelvic anatomy, we follow the approach of Lovejoy et al. [20] and divide the pelvis into upper and lower halves (dashed white line in figure 1). In the upper half, changes in the height and position of the iliac blades (alae or wings of the ilia) influence the leverage of muscles that abduct or extend the hip joint, the range of motion in the lumbar vertebral column, and the height of the centre of mass, all of which affect the ability to balance the body over the legs during a striding bipedal gait. [Emphasis added]

Note – Featured image for this article is of an Andaman islander (Sentenelese), thought to have direct archaic DNA lineage to Sub-Saharan Africans, possibly Naledi or Ergaster.