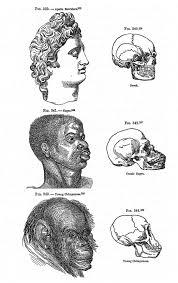 John Hawks, is a professor of evolutionary biology at the University of Wisconsin-Madison.  He is also a close friend of Lee Berger, and a frequent team member in South Africa, of the discoverers of Homo naledi.

Of particular note, Hawks studied under famed multi-regional paleo-anthropologist Milford Wolpoff of the University of Michigan.

Wolpoff and Alan Thorne from jstor.org, 1994:

We maintain there is no single home for modern humanity.  Humans originated in Africa and then slowly developed their modern forms in every area of the Old World… Both fossil and genetic evidence argues that various human groups arose where they are found today.

Over the years Hawks, the Wolfpoff protégé, has been notably more willing than other paleo-anthropologists to stick his neck out to debate and discuss controversial topics.

“Ahhh! that’s what it looks like when you have some DNA from some ancient group of people”

In an October lecture, Hawks spoke of archaic Hominin DNA admixture in modern populations.  Twice, Hawks remarked that you can tell just by looking at modern Africans, that they are descended from archaic Hominin species. 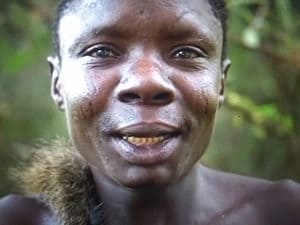 The other thing that has made our field [of paleoanthropology] more difficult is the recognition that some of these ancient hominins mixed with each other. Even though they look pretty different, they’re still breeding at their boundaries… Neanderthals contributed between 2 to 4% of the genomes of many people of the room. For people who are in east Asia or have ancestry in east Asia, it’s on the high end of that.  For people of Europe, it’s on the low end of that.  For people in Africa it’s much lower… tenths of a percent.

There’s another population that we’ve discovered, that we know of only from genetics, the Denisovans… Also contributed some DNA to living people.  In this case the maximum amount in living native Australians and people of highland New Guinea.

“Ahhh, people in Africa look like they’ve gotten some of their DNA from some other ancient groups of people” 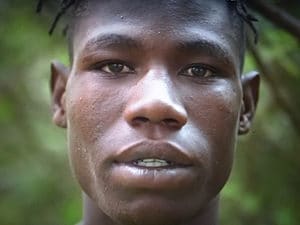 We as of yet have no ancient DNA from any African samples. But we know of the DNA from living people of Africa, that there’s a similar kind of complexity that arises.

The reason why, once you find that Neanderthals have contributed to our population, you say [with exuberance] Ahhh! that’s what it looks like when you have some DNA from some ancient group of people.

You can look for that signature in people without having the ancient genome.  You can say, Ahhh, people in Africa look like they’ve gotten some of their DNA from some other ancient groups of people. In particular hunter-gatherer peoples of Africa today.  Pygmies people of the Congo rain forest.  Kung San [KhoiSan] people of southern Africa. Hadza people of east Africa.  Those populations have some DNA from some other peoples.

Note – Kung San or !Kung refers specifically to the western Kalahari KhoiSan tribes.  KhoiSan (various spellings) or Bushmen is a more general term for all Bushmen of south and southwest Africa.

Hawks was likely referring to the Jan. 2020 study released by the UCLA genetics team of Sriram Sankararaman and Arun Durvasula.

While introgression from Neanderthals and Denisovans has been documented in modern humans outside Africa, the contribution of archaic hominins to the genetic variation of present-day Africans remains poorly understood. We provide complementary lines of evidence for archaic introgression into four West African populations. Our analyses of site frequency spectra indicate that these populations derive 2 to 19% of their genetic ancestry from an archaic population that diverged before the split of Neanderthals and modern humans.

This isn’t the first time Hawks has engaged in such speculation. 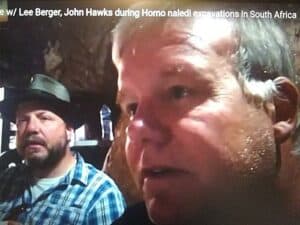 “the genomes of Hadza, Sandawe, Biaka, Baka, and San people bear evidence of a small fraction of introgression from highly genetically divergent populations that no longer exist.” — Hawks, Berger, Elife.org, 2017

“We do know that African populations derive some small fraction of their DNA, possibly as much as 5%… from archaic lineages that we haven’t discovered… there is some sign of some archaic lineage that’s contributed to some populations. What we don’t know is the identity of that lineage… It could be Naledi?”– Dr. John Hawks, lecture Oct 2017 Univ. of Wisconsin, Madison

In a 2021 Good Chemistry podcast, Hawks made an even more stunning remark, suggesting that the source of the ghost archaic lineage might be Homo naledi.

we do have increasing knowledge of the genetic variation of today’s people, because of genome efforts, sampling and the kinds of sampling that we’re doing for human genetics.

And one of the things that has emerged from that, is that African peoples have DNA that come from branches that are as old as the Neanderthals. And very much like the Neanderthal case, where you have maybe two percent of their genetics.  People today have 2% of their genetics from some other ancient groups.  We don’t know who they were.  And it’s possible that Naledi is one of these groups, maybe not.

Hawk’s longtime lab and exploration partner Lee Berger recently Tweeted out a tease for a major announcement coming in “mid-January.”  Berger said he was headed to Denmark and would hold a press conference to announce the finds.  Berger followers immediately speculated that they had found some DNA in Homo naledi.

In mid-January I’m making a very exciting trip to Denmark.  It’s a science trip and I can’t wait for the results.

The bio-lab of the Max-Planck Odense Center is located in Denmark.

Note – More info on the Hadza tribe of Tanzania – YouTube documentary from 2021, Mike of Fearless and Far, “Raiding a Baboon camp with Hadza Hunter Gatherers in Tanzania.”  And an uncensored version, not fit for YouTube at Patreon.