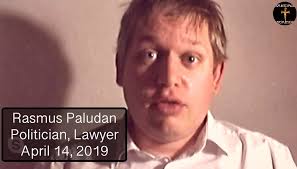 He fiercely anti-Muslim immigrant.  Paludan supports repatriation of all Muslim refugees in Denmark.  He often criticizes Muslim birth rates, and warns of an incoming wave and replacement population.

Paludan is a showman.  He’s been described as clownish.

“Paludan denies having any associations with Nazism, calling it “groundless” and that he won’t accept being labeled as a Nazi.

In a debate on live Danish TV on Wednesday, Paludan said former Danish lawmaker, Mimi Jakobsen “reminded him of Adolf Hitler more than anyone in the world,” causing wide condemnation from commentators and lawmakers across the political spectrum.

The TV channel, Danish Radio (DR), was condemned for not ending the interview after Paludan’s Nazi accusation.”

‘”She reminds me most of Adolf Hitler all over the world. You are a Nazi pig yourself, ”said Rasmus Paludan, who also asked Mimi Jakobsen to leave DR’s study.”

Watch a full interview with the legacy Counter-Jihad blog Vlad Tepes.   Paludan describes how he was hit with a rock by a leftist during a campaign event.