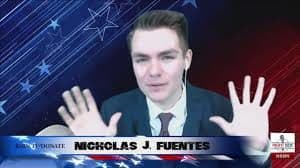 Rebuffs reporter: Nazis are leftwing, opposite of libertarians

Paul Benjamin is a UKIP candidate for Member of the European Parliament (MEP).  Of interest to readers of this website, in a recent interview, Sargon shot back at a reporter who accused him of being Nazi for his far right ethno-nationalist views.

“I don’t agree that the Nazis are the extreme right.  I don’t agree with that definition… I want decentralization, limited government… fascism itself is an ideology that comes directly out of socialism.

In the United States far right would be considered libertarian.”

As soon as he made these comments a woman observing the interview threw a fish at him.  It brazed his suit jacket.  Sargon scoffed it was a pigeon bothering him.

Sargon is running in a crowded field in southwest England.  Polls put him in the middle of the pack.  He is not expected to win.

Destiny: Um, okay, if you wanna talk about height, nobody is going to disagree with you.

Then Sargon makes the following statements:

“I think it would be against the theory of evolution, if groups of people who had devolved in different situations didn’t have physical differences.  It would be an impossibility.”

Sargon goes on to defend Race and IQ but to make it clear it should not be used to discriminate against certain groups of people.  He continues:

“But destroying someone’s life for pointing out that these things are true or false or whatever, that’s wrong man… we shouldn’t be destroying anyone’s lives for opinions they hold.”

Fuentes goes on to bring up the example of the castigation and de-frocking of geneticist Dr. James Watson